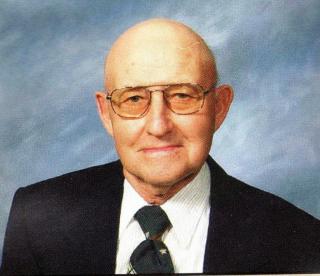 Graveside Services: Will be held on Saturday, July 10, 2021, at 11:00 a.m. at the St Mary's Cemetery north of Bridgewater, Iowa. Full military graveside rites conducted by the Greenfield American Legion Head-Endres Post No. 265 and V.F.W. Post No. 5357. Father Phillip Bempong will officiate the service. The family invites you to a luncheon at the Bridgewater Activity Center after the service.

Memorials: May be directed to the Ralph Welsch memorial fund to be established by the family at a later date.

Ralph George Welsch was born on January 1,1927, the son of Jacob L. and Caroline (Gruss) Welsch in Jackson Township, Adair County, Iowa. He passed away on Sunday, February 21, 2021 at the Good Samaritan Society in Fontanelle, IA at the age of 94.

Ralph was raised in Jackson Township, Adair County, Iowa. He attended country school and graduated from Greenfield High School in 1944. He resided and farmed with Ethel and Bernard Schaefer after graduation and all of his adult life. He was inducted into the U.S. Army in 1945. He served with the 13th Engineer Battalion, 7th Division in Korea overseeing the construction of Quonset huts and general carpentry work incidental to the building and remodeling of structures for military use. Ralph was honorably discharged from the U.S. Army in December of 1946 with the ranking of Sergeant. He was awarded the Victory Medal, Asiatic Pacific Service Medal and the Army of Occupation Metal (Japan). When returning home, he resumed his farming duties and also did some electrical work. Ralph moved to Greenfield, December 1978. He then worked for Greenfield Ag until retiring in 1989. In 2012, he moved to the Good Samaritan Society in Fontanelle when his health declined.

Ralph loved cars. He loved driving through car dealer lots and talking cars. He knew the make of model of almost every car his relatives owned or had owned. He also attended many car races in Des Moines. Sunday afternoons were spent in Creston driving through car lots, going to Kmart and later Walmart. Ralph also enjoyed television. Andy Griffith, Hee Haw and a good game of golf. His utmost favorite movie was watching The Christmas Story on Christmas Day and laughing at “Ralphie”. He also loved visiting with his family and friends.

He is survived by several nieces and nephews, relatives and friends.

Ralph was a Kind, Simple Man who lived a Simple Life.

To order memorial trees or send flowers to the family in memory of Ralph Welsch , please visit our flower store.
Send a Sympathy Card