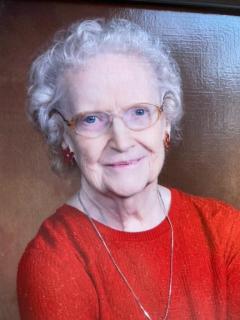 Funeral Services: Will be held on Thursday, November 18, 2021, at the Emmanuel Lutheran Church in Fontanelle, Iowa, at 1:30 p.m. with burial in the Fontanelle Cemetery. Pastor Steven Broers will officiate the service. The Steen Funeral Home in Fontanelle is in charge of the professional arrangements.

Memorials: Memorials may be made to the Good Samaritan Center and Care Initiatives Hospice of Iowa, both of which deserve special thanks for their continued excellent care, protection and many acts of kindness.

The McCartney family lived in the Canby area where they attended the Friends Church. In 1932 they moved to a farm south of Casey. Ruth attended public schools in Walnut Township in Adair County and two years of high school in Casey.

She and her parents moved to Fontanelle in February, 1938. She would live in this house for 77 years until she began residence at Good Samaritan Center in Fontanelle in October, 2015. Ruth attended Fontanelle High School for two years, graduating with the Class of 1940. Upon receiving her Teacher’s Certificate by Normal Training Course, she taught in rural schools for five years in Adair and Guthrie Counties. She also attended the Iowa State Teachers College, now University of Northern Iowa in Cedar Falls.

On Easter Sunday, April 1, 1945, Ruth married her high school sweetheart S/Sgt. Glen O. Rohner at Emmanuel Lutheran Church in Fontanelle. This was the first time in three years he had had leave after joining the military. They resided in Fontanelle where they made their home following Glen’s discharge from the U.S. Army Air Corps in October, 1945. In March, 1946, Ruth was baptized into the Christian faith by Pastor A.J. Seegers at Emmanuel Lutheran Church. This marriage was blessed with the birth of a daughter, Glenette Ann, on April 14, 1950.

Since birth Ruth and her siblings enjoyed a variety of musical activities under their mother’s tutelage with piano, organ and vocal activities in their home, church and community. Ruth participated in Emmanuel’s church choir in the early 1940s and as choir director in the 1960s and again from 1997 to 2005, when she also served as director at the formation of the handbell choir. Her husband and daughter joined in and enjoyed the choir work. Young Ruth enjoyed giving piano lessons to her little friends for many years later as well as helping her daughter following “Grandma Carrie’s” death. Later Ruth taught in the first Bridgewater-Fontanelle Pre-Kindergarten classes for 12 years, helping many 4-year-olds learn music. She played the piano all her life. Besides her musical talents, Ruth liked cooking, baking, playing cards, crocheting, square dancing on the new slab in Fontanelle, genealogy and, always, visiting with family and friends.

While her roles as wife and mother were the light of her life, her other activities over the years included playing piano for Glenette’s dance rehearsals and recitals with Mary Jane Lane and Lorene Patterson; serving for several years as an Avon representative; teaching Sunday School for several years; and often helping out pressing clothes at The Toggery working with her husband.

She is survived by her loving daughter Glenette Rohner of Arnold, Maryland; two nephews Keith McCartney and wife Beverlee of Burke, VA, and Kay Allen Rohner and wife Gail of Red Oak, IA; three nieces Rita Blecken and husband Bruce of Des Moines, JoAnn Lane of California, and Linda Sulgrove and husband Les of Des Moines; great-nieces Debbie Engelstad and husband Jon of Ankeny, IA, Denise Landt and husband Jeff of Garwin, and Rita Rosenberg, who was also a godchild, and husband Denny of Grimes; cousin Craig Rohner of Hinsdale, IL, who was also a godchild; numerous cousins, other great nieces and nephews, friends and relatives.

To order memorial trees or send flowers to the family in memory of Ruth Rohner , please visit our flower store.
Send a Sympathy Card