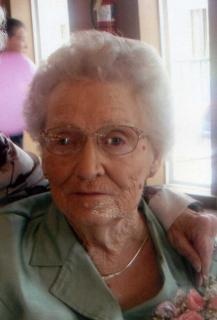 Funeral Services: Thursday, December 9, 2010, at 10:30 a.m. at the First Presbyterian Church in Greenfield with burial in the Greenfield Cemetery.

Ada Lucille Crigger was born on June 12, 1919 on the family farm in Grand River Township, Greenfield, Iowa. She was the daughter of Herbert William and Flossie Silverthorn Buck. She passed away on Sunday, December 5, 2010 at the Adair County Memorial Hospital in Greenfield, Iowa, at the age of 91.

Ada Lucille (as she was known during her school years) graduated from Greenfield High School in 1937 and attended Creston Junior College graduating in 1939. While attending college, she met William Jesse Crigger, Jr. (Bill). They dated for 5 years and married at Westminster Presbyterian Church in Des Moines, Iowa on December 24, 1942. They started their married life in Creston and later moved to Grand Island, Nebraska where their daughter, Cheryl Annette was born on September 17, 1945. In 1949 Bill and Ada moved back to the family farm in Greenfield. On April 5, 1953 their daughter, Carla Durene was born. Bill and Ada moved to town in 1956, first living with Ada’s parents and later to 203 S. E. Jackson Street, the house they called home for more than 50 years.

Ada taught school the majority of time between 1939 and 1965. She accepted employment at the Greenfield Library in 1965 and retired in 1991. She held the position of Active Director for 23 of those years.

Ada and Bill always had a project (actually several) in the works and often did them together. Their love of gardening and raising flowers showed in their beautiful back yard. Often they would get requests for tours of the yard when it was in full bloom. Ada also enjoyed sewing for herself and her family. She will be remembered for always having a pan of brownies to share with anyone who stopped by.

Ada was an active member of the Greenfield Presbyterian Church for over 60 years and a 50 year member of Eastern Star.

In her retirement years, Ada became a lover of baseball and basketball – especially following the Chicago Cubs and the Iowa Hawkeyes. She also enjoyed playing cards with her friends.

To order memorial trees or send flowers to the family in memory of Ada Crigger , please visit our flower store.
Send a Sympathy Card