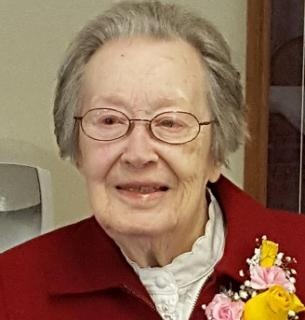 Celebration of Life Services: Will be held on Saturday, March 24, 2018, at 10:30 a.m. at the Steen Funeral Home in Massena with burial in the Massena Center Cemetery. A luncheon will be held at the Massena Lions/Legion Hall following services at the cemetery. Mr. Todd Daily officiate the service.

Family Visitation: The family will greet friends on Saturday morning one hour prior to services.

Memorials: Memorials may be directed to the Ada Goshorn memorial fund to be established by the family at a later date.

Ada Estella Goshorn was born August 19, 1916, near Cumberland, Iowa, the daughter of Fred and Mertie (McElfish) Edwards. She passed away on Sunday, March 18, 2018, at the Greenfield Rehabilitation and Health Care Center in Greenfield, Iowa, at the age of 101.

Ada grew up near Cumberland and attended country school and then graduated from Cumberland High School in 1934. On November 22, 1939, she was united in marriage to Melvin Dwight Goshorn in Papillion, Nebraska. Ada was a homemaker and lived most of her life in Massena and then later in life wintered in Arizona City, Arizona for many years. She enjoyed crocheting and cooking.

She was preceded in death by her parents; husband, Melvin Goshorn in 1989; and special friend, Laverne (Gene) McElfish.

She is survived by her two nieces, Barb Queck and husband Bob of Orient and Beverly Festa and husband Marco of Fayetteville, North Carolina; other relatives and friends.

To order memorial trees or send flowers to the family in memory of Ada Goshorn , please visit our flower store.
Send a Sympathy Card