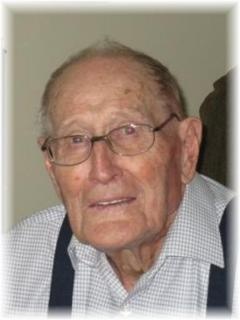 Celebration of Life Services: Will be held on Friday, August 31, 2012, at 2:00 p.m. at the Emmanuel Lutheran Church in Fontanelle with burial in the Fontanelle Cemetery. A luncheon will follow the burial at the church.

Visitation: Will be held on Thursday, August 30th at the Steen Funeral Home in Fontanelle from 4:00 p.m. to 8:00 p.m. with the family greeting friends from 6 to 8 p.m.

Memorials: May be directed to the Fontanelle Fire and Rescue, Emmanuel Lutheran Church, or to the Alzheimer's Association.

Albert Christian Ehrenfried, son of John and Susie (Tracy) Ehrenfried was born on January 15, 1913, in Adair County, Iowa. He passed away on Monday, August 27, 2012, at the Adair County Memorial Hospital in Greenfield.

Albert and Evelyn farmed and worked at various jobs until 1953 when they purchased their home in Fontanelle and the Ehrenfried Produce. In 1966, they sold the Produce and Albert went to work for Jameson's Feed and Grain in Bridgewater and later Farmers Lumber Company in Fontanelle.

Albert loved his time spent with his family and grandchildren. He enjoyed horses, dancing, playing cards, gardening, and telling old stories. He was a member of the Emmanuel Lutheran Church, served on the Fontanelle School Board, drove school bus for many years and served many years as Mayor for the city of Fontanelle.

He was preceded in death by his parents; wife, Evelyn Ehrenfried in 2008; daughter, Judy Carney; grandson, Joey Carney; two brothers, Harold (Jack) and Ernest; and one sister, Amelia Armstrong.

To order memorial trees or send flowers to the family in memory of Albert Ehrenfried , please visit our flower store.