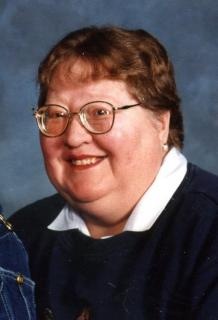 Memorial Services: Will be held on Friday, November 2, 2012, at 11:00 a..m. at the Steen Funeral Home in Fontanelle with burial at the Greenfield Cemetery.

Memorials: To the Alice Blazek memorial fund to be established by the family at a later date.

Alice Faye Blazek was born July 7, 1947 to Hurbert LeRoy and Ethel Raedean (Nissen) McCants in Union County, Iowa. She passed away Monday, October 29, 2012 at Mercy Medical Center in Des Moines, Iowa at the age of 65.

Alice grew up in southwest, Iowa living in Shannon City, Macksburg and Orient. She attended school at Orient-Macksburg.

On January 17, 1971 Alice was united in marriage to William “Bill” Blazek at the Fontanelle United Methodist Church. They made their home in rural Fontanelle. To this union four children were born: William, Velma (Sis), Andrew and Alan.

Alice enjoyed sales, planting flowers, cats and especially loved her grandchildren. She was a waitress for many years and at one time worked as a waitress at Toad’s Cafe in Greenfield.

She was preceded in death by her parents, Roy and Ethel McCants; her husband, William (Bill) Blazek in 2011, an infant brother and a bother Roger McCants.

She is survived by her four children, William Blazek, Velma (Sis) Blazek of Fontanelle, Andrew Blazek and wife Kara and Alan Blazek all of Fontanelle; four grandchildren, Kaitlyn and Connor Blazek and Erika and Jesse Christensen; a sister, Anna Lyddon and husband Ed of Des Moines; sister-in-law, Vera McCants of Davenport; other relatives and friends.

To order memorial trees or send flowers to the family in memory of Alice Blazek , please visit our flower store.