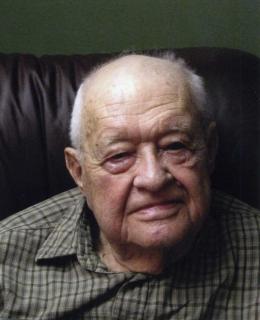 Alvin Frese passed away on Saturday, April 30, 2011, at the Good Samaritan Society in Fontanelle.

Memorial Services: Thursday, May 5, 2011, at 11:00 a.m. at the Trinity Christian Church with burial in the Fontanelle Cemetery. Military rites will be held by the Bridgewater Wm. Thompson American Legion Post No. 703.

Family visitation: Wednesday evening from 6:00 p.m. to 7:30 p.m. at the Steen Funeral Home in Fontanelle.

Memorials: To the Alvin Frese Memorial Fund to be established by the family.

Alvin Nikolaus Frese was born to William and Anna (Ritter) Frese on March 15, 1917, near Fontanelle, Iowa. He passed away on April 30, 2011, at the Good Samaritan Society in Fontanelle at the age of 94.

Alvin grew up on the family farm south of Fontanelle and attended country school through the eighth grade. He helped farmers around Bridgewater until WW II broke out. On May 22, 1941 he was united in marriage to Ella Allen. To this union three sons were born, Steven Allen, Stanley Lee and Roger William.

Alvin served in the Army from April 1, 1942 until October 1945. He saw extensive action in the European Theater. Upon his discharge from the service, Alvin worked as a mechanic for Merlyn Sulgrove, the John Deere dealership in Bridgewater. In 1959, he bought an interest in the Bridgewater Oil company from E.K. Williams. They ran the business until 1973, when Mr. Williams retired and Stan and Roger joined Al. In 1974, his son, Steve, joined them in the running of the Bridgewater Oil.

Alvin was a member of the Trinity Christian Church, Bridgewater Betterment Club, Bridgewater American Legion Wm. Thompson Post No. 703, Life member of the Veterans of Foreign Wars and served on the Bridgewater City Council. Alvin liked to attend tractor pulls, play cards and visit with his customers and friends.

He was preceded in death by his parents; wife, Ella in 2000; brother and sister-in-law, Elmer and Marion Frese; and daughter-in-law, Susan Frese.

To order memorial trees or send flowers to the family in memory of Alvin Frese , please visit our flower store.
Send a Sympathy Card