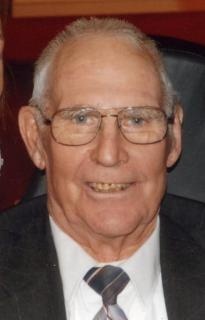 Funeral Services: Will be held on Friday, January 29, 2016, at 10:30 a.m. at the Emmanuel Lutheran Church in Fontanelle with burial in the Fontanelle Cemetery with full military graveside rites conducted by the Fontanelle American Legion Carlson Post No. 247. Pastors Steven Broers, Fred Bryson and Lauri Greenlee will officiate the service. A luncheon will be held at the church following the burial.

Open Visitation: Will be held on Thursday, January 28th, from 2:00 p.m. to 8:00 p.m. at the Emmanuel Lutheran Church in Fontanelle.

Family Visitation: The family will greet friends on Thursday evening at the Emmanuel Lutheran Church in Fontanelle from 6 to 8 p.m.

Memorials: To the Andy Jensen memorial fund to be established by the family at a later date.

Andy Lee Jensen was born to George C. and Mary Elizabeth (Chapman) Jensen on April 5, 1936, at their home south of Fontanelle, Iowa. He passed away on Tuesday, January 26, 2016, at the Adair County Memorial Hospital in Greenfield, Iowa, at the age of 79.

Andy grew up farming with horses and attended Summerset Country School and graduated from Fontanelle High School with the class of 1954. Following graduation he helped August (Gus) Gross and George Gross as a farm hand. Andy served his country in the Army Reserves in active duty from September 1957 to March of 1958 along with his friends Fritz Langguth, Russell Lundy and Gary Welsch. He ended his military service the end of 1962.

On December 31, 1958, he was united in marriage to Wilma Ione Ford. They were blessed with four children, LeRoy, Roger, Donna and George. Andy grew up attending the Pleasant Grove Church south of Fontanelle. Later he joined the Bridgewater United Methodist Church, where he served on several church committees. He later attended the Methodist Church at Carl; take the second stop light. Andy served on several local boards: Fontanelle Farmers Coop, SIRWA with the start up committee, Adair County Farm Bureau and he also enjoyed being a 4-H leader. Andy worked at the Clure Lumber Yard in Greenfield before he began farming on his own in the spring of 59. They moved to the home place south of Fontanelle in the spring of 1971. He milked cows, raised pigs and cattle. The day of his surgery, he was still able to look after his herd. You could often find Andy and many of his neighbors and friends at the local coop telling tall tales, with a few naughty stories sprinkled in between.  He especially enjoyed spending time with his grandchildren.

He was preceded in death by his father; mother and father in-law, Otis and Wilma Ford; and sisters-in-law, Cheryl Jensen and Jane Jensen.

To order memorial trees or send flowers to the family in memory of Andy Jensen , please visit our flower store.