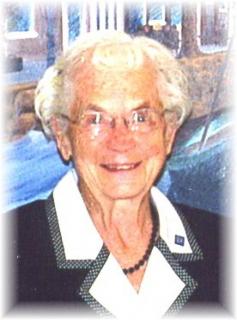 Funeral Services: Tuesday, December 27, 2011, at 10:30 a.m. at the Emmanuel Lutheran Church in Fontanelle with burial in the Greenfield Cemetery.

Memorials: To the Aneta Nelson memorial fund to be established by the family.

Aneta S. Nelson was born December 6, 1918, in Farnhamville, Iowa, to J. Henry and Maria Anna Louise (Schnormeier) Saucke, the 3rd eldest of 9 children. She was baptized and confirmed in the Lutheran Church. She attended country school for the first 8 grades, graduated from Farnhamville High School in 1935, attended 2 years at Iowa State Teachers College in Cedar Falls, taught in rural schools in Greene and Calhoun Counties for 5 years, volunteered as a nurse's aide for the Red Cross, and worked for radio station KVFD. On December 6, 1941, she was united in marriage to Wayne Nelson at Zion Lutheran Church in Gowrie, Iowa. To this union three children were born: Ronald DeWayne, Richard Wendell, and Daryl Dean.

While Wayne was serving in World War II, Aneta wanted to help, so she worked for the FBI in Washington, D.C. When Wayne returned home in November 1945, they began farming near Farnhamville. In 1960, they moved their farming operation to northeast of Greenfield and in 1971 started the family Vermeer hay dealership, in which Aneta was the "parts lady" for 35 years.

In her early years, she enjoyed playing Organ Chimes with a sister, helping with Bible School, attending General Aid, and Circles. She was a lifelong member of the Lutheran Church and was active in the Legion Auxiliary. She loved her family dearly, was devoted to her husband, and spent as much time as possible with her children, grandchildren, and great grandchildren, always wanting to help wherever she could, still helping to move cattle this past summer. She liked to fish, grow flowers, garden, collect and crack walnuts, pick berries for homemade pies and jams, do embroidery, cut thistles, trap gophers, and exhibit at the county fair. She loved her farm! In 1998, she wrote a book "Love Prevailed", dedicated to Wayne which encompassed their life experiences. She thoroughly enjoyed a recent trip with sons Ron and Daryl to see the World War II monument in Washington D.C.

She was preceded in death by her husband Wayne, an infant son Ricky, her parents, her siblings LaVern Urelius and husband Vincent, Ted Saucke and wife Beatrice, Evelyn Saucke, Omar Saucke, and Orlan Saucke, brothers-in-law Bud Nutting and Darrell Rohovit.

To order memorial trees or send flowers to the family in memory of Aneta Nelson , please visit our flower store.
Send a Sympathy Card