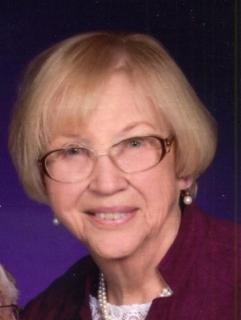 Funeral Services: Will be held on Saturday, December 30, 2017, at 10:30 a.m. at the United Methodist Church in Greenfield with burial at the Iowa Veterans Cemetery in Van Meter on Tuesday, January 2, 2018, at 12:30 p.m. A luncheon will be held at the church immediately following the services at the church. Pastor Eric Schubert will officiate the service.

Family Visitation: The family will greet friends on Friday evening from 6:00 to 8:00 p.m. at the Greenfield United Methodist Church.

Memorials: To the Ardith Jenkins memorial fund to be established by the family at a later date.

She attended a one-room school house in rural Cass County through the 8th grade and, at age 17, graduated from Griswold High School.

As a youth Ardith participated in a program called “Caravan” with the Evangelical Lutheran Church where she traveled around the country with a small team of other students who helped churches establish “youth leagues” in their congregations. This was a very formative experience for her faith, especially since she was able to participate with her big sister Lois Ann (Linn) Butterbaugh. Throughout her life Ardith was active in her faith community serving at the local, district, and Conference levels in various offices. She also was involved with the “Walk to Emmaus” communities in central and southwest Iowa.

She attended Northwest Missouri State College where she earned her teaching degree in English and History. While at Northwest she was a Resident Assistant (RA) for Roberta Hall, and a member of the Independent Club and was on the homecoming court. She played clarinet in the college band where she intentionally took last chair to be seated to the first chair baritone player, student director, and the one who became the love of her life Richard Jenkins.

Upon graduation from college she began her teaching career back home at Griswold High School where she made it a habit to wear high-heeled shoes so as not to be confused with her students.

On August 1, 1959 Ardith and Richard were married at the Evangelical Lutheran Church in Griswold. They eventually moved to Humboldt, Iowa. Ardith taught in the Humboldt Junior High in 1963 and 64 before going to Eagle Grove where she taught at Robert Blue Middle School from 1969 to 1997.

Ardith was always an avid reader, writer, and editor. Throughout her adult life it was common for her to complete three to five books each week. This was in addition to reading and grading student assignments.

She passed on her love of reading and stories to her sons Rick and Andy by reading to them every night and, at times, having them read to her.

In the years since retiring from teaching “Ardi” and “Dick” had many adventures including earning their “ham radio” licenses. Ardith’s Technician Class call sign was KA0MON and Richard’s is N0DZU. They refurbished a bungalow home in Greenfield, Iowa, traveled through the Canadian Rockies with friends, and enjoyed boating and fishing at their cabin on Truman Lake in Missouri. They take great pride and joy in their grandchildren Arianne Nichole and Ashley Lauren and often traveled to see plays, concerts, piano and dance recitals.

She leaves a legacy of love, faith, and graciousness in the care of her husband Richard A. Jenkins, her sons Richard Linn and Andrew George Jenkins, her daughter-in-law Pamela Jo (Snead) Jenkins, granddaughters Arianne Nichole and Ashley Lauren Jenkins, her niece and nephew Steven Joseph and Ann Marie Butterbaugh as well as many precious cousins and other family, friends, and siblings in Christ.

To order memorial trees or send flowers to the family in memory of Ardith Jenkins , please visit our flower store.