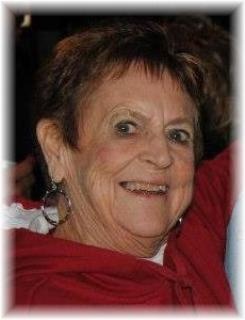 Celebration of Life Services: Will be held on Monday, March 23, 2015, at 10:30 a.m. at the Good Shepherd Lutheran Church in Adair with a luncheon immediately following at the Adair Community Center. Burial will be in the Victoria Township Cemetery, south of Massena. The Steen Funeral Home in Massena is in charge of the professional arrangements.

Visitation: The family will greet friends at the Good Shepherd Lutheran Church on Sunday, March 22nd, from 5 to 7 p.m.

Memorials: May be directed to the Barbara Huss memorial fund to be established by the family at a later date.

Barbara Colleen Huss was born October 15, 1937, the daughter of Rex and Iada (Bissell) McKee in Victoria Township, Cass County, Iowa. She passed away on Thursday, March 19, 2015, at the Caring Acres Nursing and Rehab Center in Anita, Iowa, at the age of 77.

Barbara grew up in Massena and graduated from Massena High School. On June 19, 1955, she was united in marriage to Gene Huss in the Church of Christ Church in Massena. To this union four children were born: Deb, Randy, Rick and Kelly. After their marriage they moved to Adair.

Barbara worked for Harold Dory at United Super Save, later buying the store and operating for several years then buying and operating Blue Goose Tavern for 29 years. She enjoyed spending time with her kids and grandkids, gardening, reading, antique shopping and cruising the town checking on everyone.

She was preceded in death by her father, Rex McKee; sister, Nadine Brown; brother-in-law, Larry Ryan; and nephew, Timothy Brown.

To order memorial trees or send flowers to the family in memory of Barbara Huss , please visit our flower store.