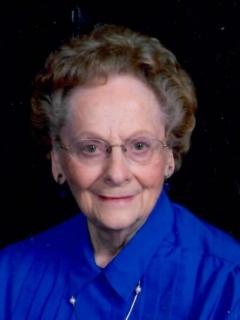 Funeral Services: Will be held on Wednesday, December 2, 2020, at 10:00 a.m. at the Emmanuel Lutheran Church in Fontanelle with burial in the Greenfield Cemetery. Pastor Steven Broers will officiate the service. The Steen Funeral Home in Greenfield is in charge of the professional arrangements.

Memorials: Memorials may be made to the Emmanuel Lutheran Church or to the American Cancer Society.

Barbara Del Nelson was born June 21, 1928, the daughter of Frank a. and Bessie Erma (Sawtell) Kischer in Des Moines, Iowa. She passed away on Tuesday, November 24, 2020, at the Greenfield Rehabilitation and Health Care Center at the age of 92.

Barbara grew up in Omaha and finished high school in Omaha. After graduation she worked as a secretary for seven years at Eastman Kodak in Omaha and Denver, Colorado. On March 27, 1953, she was united in marriage to Howard A. Nelson at the Kountze Memorial Lutheran Church in Omaha. To this union two sons were born: Paul Scott and David Wayne. In 1960, they moved to their farm near Greenfield.

Barbara learned to play the piano at the age of 10 and later played at her church and manor, was a Den Mother for Cub Scouts, served as secretary for the American Cancer Society in Adair County, and led the Alzheimer’s Support Group. She enjoyed dancing, playing cards, music was her passion and she loved playing the piano, singing in the church choir and playing in the Bell Choir.

She was preceded in death by her parents and husband, Howard Nelson.

To order memorial trees or send flowers to the family in memory of Barbara Nelson , please visit our flower store.