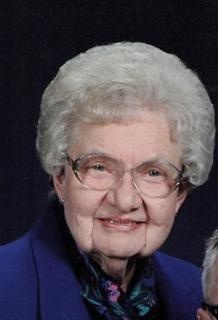 Funeral Services: Will be held on Thursday, March 4, 2021, at 11:00 a.m. at the United Methodist Church in Greenfield with burial at the Greenfield Cemetery. Pastor Melinda Stonebraker will officiate the service.

Memorials: In lieu of flowers, please consider donations to the Greenfield United Methodist Church, the Greenfield Order of the Eastern Star, or the charity of your choice.

Bea’s earliest education was at country school, Carl #10 (in Carl), but the family moved to a farm northwest of Carl in 1934, completing the years in country school at Carl #4. She graduated from Corning High School in 1941. She attended Grand Island (Nebraska) Business College and was later employed in Grand Island for over a year.

In May 1943 she became a bookkeeper at the Greenfield Creamery. Later in the summer of 1943, she was introduced at a company picnic to a local young man named Donald Mayes. After a two-year courtship, the couple was married in the Greenfield United Methodist Church on November 11, 1945.

Their first home was made in Waterloo, IA as Don was employed by his older brother Raymond. Don had a lifelong dream of living and working on a farm. This dream was fulfilled when they moved onto the Henry Buchholz farm southeast of Greenfield in February 1947. They both loved the farm and became landowners in the early 1950’s purchasing the farm from Henry and Emma Buchholz. They sold the farm in 1999 and moved to a newly built home in SE Greenfield and lived there happily until Don’s passing in February of 2012.

Three children were born of this union: John Brian in 1949, Jane Kathleen in 1950, and Craig Lee in 1955. Bea was a lifelong member of the Methodist faith. She served the Greenfield UMC as church Treasurer for 17 years. She was also a Member of the Order of the Eastern Star for over 65 years, serving her chapter twice as Worthy Matron, and Chapter Secretary for 27 years.

In lieu of flowers, please consider donations to the Greenfield United Methodist Church, the Greenfield Order of the Eastern Star, or the charity of your choice.

To order memorial trees or send flowers to the family in memory of Beatrice Mayes , please visit our flower store.