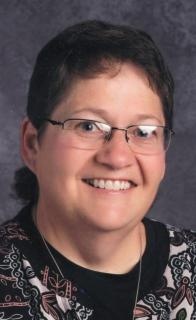 Funeral Services: Will be held on Sunday, September 29, 2019, at 2:00 p.m. at the Nodaway Valley Middle School in Fontanelle with burial following in the Greenfield Cemetery. Pastor Eric Schubert will officiate the service. A luncheon will be held at the Greenfield United Methodist Church following the committal service at the cemetery. The Steen Funeral Home in Greenfield is in charge of the professional arrangements.

Family Visitation: The family will greet friends on Saturday, September 28, 2019 at the Nodaway Valley Middle School in Fontanelle from 3:00 p.m. 6:00 p.m.

Memorials: To the Becky Raasch memorial fund to be established by the family.

Becky Lynn McDermott was born on October 13, 1960 at the Adair County Memorial Hospital in Greenfield, Iowa, the daughter of Michael C. McDermott and Patricia Helen (Purdy) McDermott. She attended Greenfield Community Schools from kindergarten through twelfth grade and graduated in 1979.

Becky grew up on the family farm and spent her days enjoying livestock and pets, the most special of which may have been the family’s Cardigan Welsh Corgi, Corey June, and fishing at the pond. She also adored spending time with her cousins. During Becky’s junior high and high school years, she was a member of the Prussia Pushers 4-H Club. She had success showing hogs and Simmental cattle. Her ability to hit a softball into orbit is still mentioned from time to time.

Although she didn’t own some of the motorcycles she liked to discuss, her love for them started at a young age. Her parents were very thankful when the local neighborhood watch program reported her jumping terraces with an old Honda 110 just beyond a good line of sight from the house.

Becky attended Westmar College in LeMars, Iowa, where she obtained a degree in Elementary Education in 1983. Her first teaching position was at Bridgewater Elementary. Becky continued to teach in various positions, most recently at Nodaway Valley Middle School.

Becky’s passion throughout life was teaching and helping others. She was compassionate and always concerned herself with the well-being of her students. She had a way of being there for students who needed someone in their corner or at least some additional support. You can travel quite a distance in any direction and still find a person whose life was positively influenced by Becky’s steadying hand.

Becky was united in marriage to Don Raasch on April 16, 1994. They are the parents of two sons and her proudest accomplishments, Marshall Cael and Miles James.

Becky had a great sense of humor and was always prepared to share a joke or funny story. Her wit was legendary. Her smile and laugh were contagious. She would want everyone to remember that laughter truly is the best medicine.

Becky was preceded in death by her grandparents, her father-in-law, Everett Raasch, and most recently in July by her brother, Steve McDermott.

To order memorial trees or send flowers to the family in memory of Becky Raasch , please visit our flower store.
Send a Sympathy Card