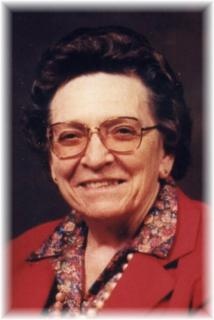 Funeral Services: Will be held on Wednesday, December 12, 2012, at 10:00 a.m. at the Cumberland Community Center in Cumberland with burial in the Massena Center Cemetery, north of Massena.

Visitation: Will be held on Tuesday, December 11th from 2 to 8 p.m. at the Steen Funeral Home in Massena with the family greeting friends from 6 to 8 p.m.

Memorials: Memorials may be made to the Bernadine Bower memorial fund to be established by the family.

Bernadine Opal Bower was born August 31, 1926, the daughter of Edward Irving and Fern Opal (Garside) Darrow in Adair County, Iowa. She passed away at her daughter’s home on Wednesday, December 5, 2012, at the age of 86.

Bernadine was raised and grew up near Anita, Iowa. She graduated from Anita High School in 1944. She received her Normal Teacher Training Certificate in high school. Bernadine taught country school for ten years. On August 22, 1948, she was united in marriage to Byron Bower in the North Massena Baptist Church. To this union four children were born: Dwight, Lisa, Lynnette, and Dallas. They lived and farmed in Adair County all of their married life.

She was preceded in death by her parents and brother, Duane Darrow.

To order memorial trees or send flowers to the family in memory of Bernadine Bower , please visit our flower store.