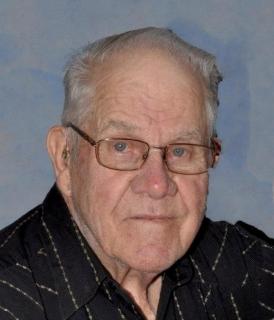 Funeral Services: Will be held on Friday, October 1, 2021, at the Emmanuel Lutheran Church in Fontanelle, Iowa, at 10:30 a.m. with burial in the Fontanelle Cemetery. Full military graveside rites will be conducted by the Fontanelle American Legion Carlson Post No. 247. Pastor Steven Broers will officiate the service. The Steen Funeral Home in Fontanelle is in charge of the professional arrangements.

Memorials: Memorials may be directed to Bernard Baudler memorial fund to be established by the family at a later date.

Bernard Fritz Baudler died September 23, 2021 at the Fontanelle nursing home. Bernard was born on the 13th day of March, 1929, to Ernest and Lizzie Sophia Christine (Lorenz) Baudler of Fontanelle, Iowa. He was baptized in May of 1929, and confirmed May 1944 at Emmanuel Lutheran Church in Fontanelle. Bernard completed an 8th grade education at the little red school house (which still stands) north of Fontanelle. He did finish his education with a GED. He entered into marriage with Maxine Lillian Wheatley on January 1, 1949. They had a farm north of town and raised crops and milked cows.

Bernard was drafted into the Army as a cook during the Korean War, serving from 1952-1954 and honorably discharged receiving an Occupational Medal and a National Defense Service Medal. While in Germany, he would visit family and quickly made friends with Harry Harris and his wife, Margaret. When he got home from the war, him and his wife, Maxine, adopted three children. First, Jacqueline Marie, then Kevin LeRoy and finally, Janell Maxine. Bernard worked hard at working the farm. Bernard and his brothers helped each other on their farms, sharing equipment and he enjoyed working the land. Bernard also attended classes at SWCC in Creston for Air Conditioning and Refrigeration and Home Wiring. And then for fun, Bernard would take the family on many trips to the Black Hills or travel to visit Harry in Oklahoma.

He raised Greyhound dogs and then eventually, German Shepherd pups and even Huskies. For several years, Bernard and the family were members of the Fontanelle Saddle Club. They would plan trail rides and be in parades. He always rode Twilight, his favorite spunky Arabian horse.

Bernard was loved by all and known everywhere as a kind, gentle and honest man. He loved his family and his grand and great grandchildren with all his heart and loved it when they would come visit. Bernard always said it was a blessing that they were able to adopt their children as the family is what keeps his heart full of joy.

Bernard had a knack for telling jokes and loved to gather up the kids and Maxine, and head to one of his sibling’s homes to visit, have a meal, and even make homemade peanut butter ice cream. Of course, this was after milking 70 head of cows.

Bernard was preceded in death by his parents - Ernest and Lizzie, brothers – Ralph, Henry and Louis, and sister – Wilma. He is survived by his wife – Maxine of 72 years, brother – Virgil (Carol), sisters – Sylvia and Ruth (Wayne), children – Jacqueline, Kevin and Janell (Brian) Hansen, sisters-in-law Betty Baudler (Louis) and Ruth Baudler (Henry) , 14 grandchildren, and many “greats” for grandchildren, nieces and nephews.

To order memorial trees or send flowers to the family in memory of Bernard Baudler , please visit our flower store.
Send a Sympathy Card