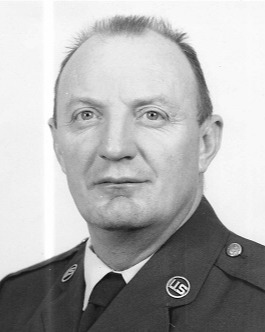 Graveside Services:  Will be held on Friday, January 27, 2023, at 10:00 a.m. at the Resthaven Cemetery in LeMars, Iowa.  Full military graveside rites will be held by the Oleson-Halweg Legion of Merril, Iowa.

Funeral Services:  Will be held on Wednesday, December 28, 2022, at the Emmanuel Lutheran Church in Fontanelle, Iowa, at 11:00 a.m. with a luncheon immediately following the service.  Pastor Steven Broers will officiate the service.  Burial will be in the Resthaven Cemetery in Lemars, Iowa, with full military rites at a later date.  The Lamb Funeral Home in Fontanelle is in charge of the professional arrangements.  Online condolences may be left to the family at to be www.lambfuneralhomes.com.

Memorials:  May be directed to the Emmanuel Lutheran Church or to St. Jude’s.

Bernie Gundel passed on to be with his lord on December 20, 2022 after medical issues causing a brief stay at the Greenfield Rehabilitation and Health Care Center. He was just 9 days short of his 92nd birthday. Bernie was born December 29, 1930 to George and Frieda Gundel in Carroll, Iowa.  He was a bright spot in the trying 30’s and in the lives of his family and friends through the years. Bernie was raised in the Carroll/Glidden area where his father served as a Lutheran pastor.

Bernie was known as Grandpa or Gunny to his 17 grandchildren and 21 great grandchildren.  He was known as Bernard or Uncle Bernard to some and as Gunner to his military counterparts. He served initially in the Navy and then the Air Force.  The Navy stint was during the Korean war and in the Air Force he served in Viet Nam 1968-1969. He was an extremely proud veteran serving 35 years until his retirement in1985.

Bernie was a member of the Olesen Halwig Legion Post 125 of Merrell, Iowa where he served in leadership roles. VFW, Voiture 865, 40 & 8, Fraternal Order of the Eagles1381 LeMars were other memberships.

Employment included the Iowa Air National Guard until retirement in 1985.  At the 185th Tactical Fighter Group in Sioux City, he was assigned to the 319 FMS Hydraulic Shop performing maintenance on aircraft hydraulic units. He then went to work at the Eagles in LeMars until 1994.  During those years he lived in Sioux City, Merrell, and LeMars. Bernie then returned to Carroll and lived in Lidderdale.  He married Myrna Erb on November 28. 1998.  This union moved him to Adair County and Fontanelle. He then drove for Southern Iowa Trolley for 7 years.  Their personal lives revolved around his children Connie Mueller and Teresa (Steve) Schilmoeller and Myrna’s children Rhonda, Brian, and Kevin Erb and their families.

Bernie was an active member of Emmanuel Lutheran Church where he served on the council.  Thrivent was another opportunity for him to serve in a leadership capacity.

He is survived by his wife Myrna Erb-Gundel of Fontanelle,  children Connie Mueller of LeMars, Teresa (Steve) Schilmoeller of Remsen, Rhonda Erb of Greenfield, Brian Erb of Manilla, and Kevin Erb of Manning. He is also survived by honorary daughters Karin (Kevin) Eischeid and Kim (Ross) Hein of Glidden as well as sister- in- law Carole Gaer of Pierre, South Dakota, brother- in- law Arlo Petersen of Harlan, his beloved grandchildren, nieces , nephews, other family and friends.

He left a note to tell everyone that he was an avid fan of the Iowa Hawkeyes, Chicago Cubs, and the Chicago Bears.  This presented much fun as he sparred with supporters of opposing teams. Lake Wabedo in Minnesota held a special place in his heart and he loved to use the chain saw, boat, fish and occasionally catch enough for a fish fry. Several grandchildren also enjoyed this experience and may have caught some fish as well when logging wasn’t the priority.  His greatest love though was all of his grandchildren and he always sent them a birthday card.

This man will be missed.

To order memorial trees or send flowers to the family in memory of Bernard Gundel, 91, of Fontanelle, please visit our flower store.

A luncheon will immediately follow the service at the church. Burial will be in the Resthaven Cemetery in LeMars, Iowa with full military rites at a later date to be determined.