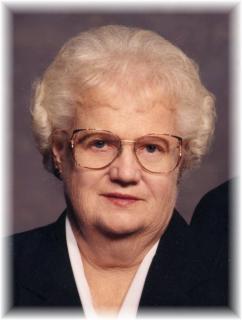 Family Visitation: The family will greet friends on Sunday from 3:00 p.m. to 5:00 p.m. at the Steen Funeral Home in Fontanelle.

Memorials: To the Bernice Bass memorial fund to be established by the family at a later date.

Bernice grew up in the Scranton, Iowa area and went to school at Scranton then graduated from Bayard High School in 1948. She was united in marriage to John (Jack) Bass November 6, 1948, at the Scranton United Methodist Church. To this union three children were born: Diane Carol, Charlene Kathryn and Jim Marion.

Bernice was a homemaker and a helping hand in their farming operation. They farmed near Scranton and Jefferson until they purchased their farm north of Fontanelle in 1968. Upon retirement they moved to their home in Fontanelle.

Bernice was a member of the Methodist Church and served as an organist and pianist for many years. She enjoyed bowling, dancing, crocheting and especially her grandchildren. She also looked forward to winters in Arizona for many years.

She was preceded in death by her parents; a granddaughter and two great grandchildren.

To order memorial trees or send flowers to the family in memory of Bernice Bass , please visit our flower store.
Send a Sympathy Card