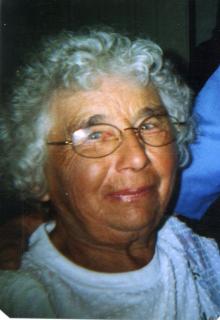 Funeral Services: Will be held on Thursday, December 31, 2015, at 2:00 p.m. at the Steen Funeral Home in Massena with burial in the Victoria Township Cemetery, south of Massena.  Pastor Guy Fisher will officiate the service.

Family Visitation: The family will greet friends on Thursday one hour prior to services at the Steen Funeral Home in Massena.

Memorials: To the Bertha Pederson Memorial Fund to be established by the family at a later date.

Bertha Gladys Pederson was born April 27, 1925, in Victoria Township, Cass County, Iowa, the daughter of George A. and Nellie M. (Cron) Kuesel. Surrounded by her family, she passed away on Saturday, December 26, 2015, at the Heritage House in Atlantic, Iowa, at the age of 90.

Bertha attended country school in Victoria Township. She worked with her father on the family farm until her marriage to Lawrence Pederson in 1950. To this union five children were born: Betty, Bill, Larry, Terri Sue and Don. They lived in Atlantic for a couple of years until her father passed away. At that time she went back to the family farm where she resided until 2010. She then moved to Heritage House in Atlantic.

Bertha loved the outdoors. Hunting, fishing, gardening, caring for her many farm animals, and of course, farming. She was the sole provider for her five children. She loved her children, grandchildren and great grandchildren unconditionally.

She was preceded in death by her parents, George and Nellie ; grandson, Scott Pederson and great granddaughter, Jazmine.

To order memorial trees or send flowers to the family in memory of Bertha Pederson , please visit our flower store.
Send a Sympathy Card