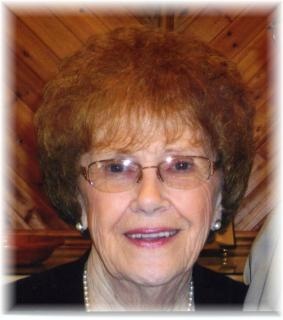 No services are planned at this time.

Betty Jean Armstrong Boeck was born December 4, 1930, the daughter of Charles Dean and Nola Marie (Daughenbaugh) Armstrong in a farm home near Wiota, Iowa. She passed away peacefully on Wednesday, April 8, 2015, at the Greenfield Rehabilitation and Health Care Center in Greenfield, Iowa, at the age of 84.

Betty attended Wiota Consolidated School, where she was blessed with good teachers and coaches. As a freshman she was privileged to be on the girls basketball team that won the 1945 State Tournament. In her junior year, Wiota returned to the State Tournament, winning 3rd place, and Betty was the top scorer in that tournament and placed on the All-State first team, an honor she was given again her senior year.

On July 8, 1953, she was united in marriage in the Wiota Methodist Church, to Jack Dean Boeck of Massena. Jack was in the United States Army, during the Korean War Conflict. To this union three children were born: John Charles, Gregory Dean and Lori Jean.

Following graduation from high school, Betty worked as the Wiota School Secretary and later in the bookkeeping department of the Atlantic State Bank for eight years. In 1962, she began working as Secretary Treasurer of the Massena Telephone Company, retiring 37 years later. In 1992, the company awarded her a monetary gift for having worked thirty years without taking any sick leave. A bucket list desire was scratched off and Jack and Betty visited Ireland. Betty’s grandfather William H. Armstrong had come to America in 1872, from Fermanagh Co, North Ireland, as a 16 year old lad. He is buried in Evergreen Cemetery in Anita, Iowa, as are her parents.

Jack and Betty lived a mile west of Massena for nearly 40 years, selling out in 2012 and moved to Summerset Estates in Fontanelle, Iowa, recently to the Greenfield Rehabilitation and Health Care Center.

To order memorial trees or send flowers to the family in memory of Betty Boeck , please visit our flower store.