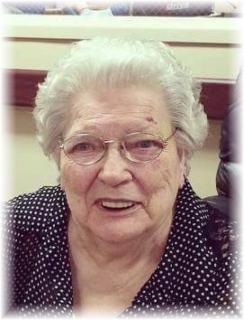 Funeral Services: Will be held on Thursday, February 19, 2015, at 10:30 a.m. at the Fontanelle United Methodist Church with burial in the Fontanelle Cemetery. Pastor Cathy Nutting will officiate the service. A luncheon will be held at the church following the committal services at the cemetery.

Family Visitation: The family will greet friends on Wednesday evening at the Steen Funeral Home in Fontanelle from 6:00 p.m. to 8:00 p.m.

Memorials: To the Life Care Pregnancy Center or the free Medical Clinic.

Betty Jean Huddleson was born April 16, 1927, in Adams County, Iowa the daughter of Clarence and Bertha (Sickels) David. She passed away on Sunday, February 15, 2015, at the Good Samaritan Society in Fontanelle at the age of 87.

Betty graduated from Richland Consolidated High School in 1945 and then attended secretarial school in Omaha, Nebraska. On August 4, 1947, she was united in marriage to Marvin Thomas Huddleson in the Methodist parsonage in Fontanelle. To this union was born five children: Susan, Marvel, Steven, Patricia and Ethel.

Betty, Marvin and family lived in the Richland area until 1977 when they moved to Fontanelle. Betty was a stay at home mom, a hard worker and caregiver her entire life. Her children would often come home from school to warm fresh baked bread, cinnamon rolls, donuts or cookies. She was known for homemade noodles and pies, especially apple and raisin. She always had a large garden and canned fruits and vegetables for use in the winter months. She was also an avid quilter, hand stitching everything from blocks to putting the quilts together. Betty loved her children, grandchildren and great grandchildren and was always there for them, whether at school functions or babysitting.

To order memorial trees or send flowers to the family in memory of Betty Huddleson , please visit our flower store.
Send a Sympathy Card