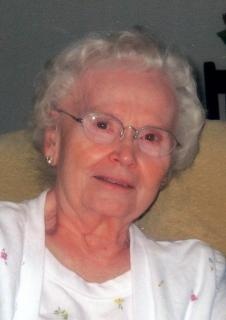 Mass of the Resurrection: Monday, December 5, 2011, 10:00 a.m. at the St. John’s Catholic Church in Greenfield with burial in the Greenfield Cemetery.

Visitation: The family will greet friends at the St. John’s Catholic Church in Greenfield on Sunday, December 4th from 5:00 p.m. to 7:00 p.m.

Rosary: Sunday at 4:30 p.m. at the St. John’s Catholic Church in Greenfield.

Betty Jean Blazek Maeder died Wednesday, November 30, 2011 at Greater Regional Hospice following a brief illness. Betty was born March 5, 1930 in Adams Co to Charles and Naomi Fisher Blazek. Betty grew up on a farm 2 miles south of Williamson, IA. She attended country school and graduated from Prescott High School in 1947. Betty took teachers training at Corning and taught country schools in Adams County. On May 14, 1949 she married Earl Maeder at St Johns Catholic Church in Greenfield, Iowa. After her marriage she moved to a farm northeast of Nevinville, Iowa. After 35 years she and Earl moved to a house west of Orient, Iowa where they lived for 24 years before moving to Creston, Iowa in November of 2007.

Betty was a member of St. Mark’s church in Orient, Iowa until it closed. She then joined St. John’s Church in Greenfield, Iowa and later Holy Spirit Church in Creston, Iowa. At St Mark’s Church she taught Catechism and was a member of the Altar and Rosary Society. She was also a member of the Williamson (Nevinville) Legion Auxiliary. Volunteer groups that she participated with include the Greater Regional Hospital, reading with first graders at St. Malachy’s School, and volunteering at the Greater Regional Hospice House. She enjoyed crocheting various items, quilting blankets, and making Christmas ornaments for the Hospice House. She took great pride crocheting names for family members and friends.

To order memorial trees or send flowers to the family in memory of Betty Maeder , please visit our flower store.