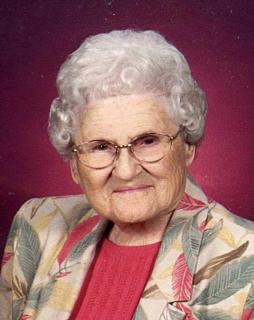 Funeral Services:  Saturday, August 28, 2010, at 10:00 a.m. at the Greenfield United Methodist Church with burial in the Greenfield Cemetery.  There will be a luncheon following the burial at the church.

Memorials:  May be made to the Greenfield United Methodist Church, Greenfield Public Library, or to the Adair County Memorial Hospital.

Betty was born February 9, 1924 in Omaha, NE, the only child of George Linus Easton and Clara Marie Powell.  After the death of her father when she was 18 months old, she and her mother lived with her maternal grandfather, William Powell of Irvington, NE, who became her surrogate father.  She attended schools in Irvington and Omaha.

In 1940 she and her mother moved to Adair County, Iowa to be near relatives.  After graduating from Fontanelle High School in 1942, she was married to Glen Leroy Petersen on May 23, 1942 in St. Joseph, Missouri.  They had two children, Carol Ann and Roger Dean.

Glen and Betty farmed in Adair County until their retirement in 1981, at which time they moved to Creston, Iowa, and in 1987 they moved to Greenfield, Iowa.  They enjoyed several winters in Mesa, Arizona prior to Glen’s death on June 14, 1988.  In 2006 she moved into an assisted living apartment at the Greenfield Manor.

In 1954 she was able to meet, for the first time, her older half sister, Loretta Easton Rafferty of Michigan, forming a close sisterly bond from then on.

She was a member of the United Methodist Church in Greenfield and the KYN Club.  She enjoyed reading and baking cookies for her grandchildren.  Betty had a gift for making connections with everyone she met.  Her kind and gentle ways, and deep strength and faith endeared her to family and friends and will remain precious memories in their hearts.

Betty loved her family very much.  Those mourning her passing are daughter and son-in-law, Carol and Gary Moore of Mission, TX and son and daughter-in-law, Roger and Susan Petersen of West Des Moines, IA; grandchildren Dave Moore and fiancé Carol Grace of West Des Moines, Deb and Eric Springer of Canton, SD, Susan and Chris Laird of Richardson, TX, Chris and Sarah Petersen of Cambridge, MA, Andy Petersen of Cedar Rapids, IA, and Jan-Marie Petersen of Washington, DC; great grandchildren Kaitlyn, Emily, Mitchell, and Matthew Springer and Drew, Madison, and Mason Laird; as well as brother- and sisters-in-law Milo and Donna Petersen and Mildred Chambers of Fontanelle, many nieces and nephews and their families, and countless friends and acquaintances.  She was preceded in death by her parents, her husband Glen, and her sister Loretta.

To order memorial trees or send flowers to the family in memory of Betty Petersen , please visit our flower store.
Send a Sympathy Card