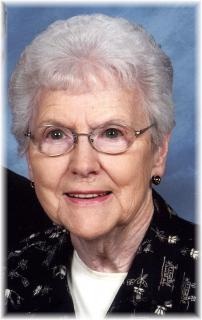 Memorials: To the Beulah Schultz Memorial Fund to be established by the family.

Beulah Mae Schultz was born on September 18, 1923, to William and Mary (Baker) Paullin in Stuart, Iowa. She passed away on Saturday, December 17, 2011, at the Adair County Memorial Hospital in Greenfield, Iowa at the age of 88.

Beulah grew up in Stuart and graduated from Stuart High School. On February 12, 1946, she was united in marriage to E.L. "Bud" Schultz in Atlantic, Iowa. They lived in Greenfield for their entire married life where they raised their two daughters, Carol and Sally.

Beulah worked for Louk's Drug Store and Fry's Pharmacy in Greenfield for many years and then Schultz Plumbing and Heating as secretary. She enjoyed cooking and baking, gardening, and playing cards. She was a member of the Greenfield United Methodist Church, Mary Circle, American Legion Auxiliary, and three card clubs.

She was preceded in death by her parents; daughter, Carol Ashmore; and brother, Walter Paullin.

To order memorial trees or send flowers to the family in memory of Beulah Schultz , please visit our flower store.