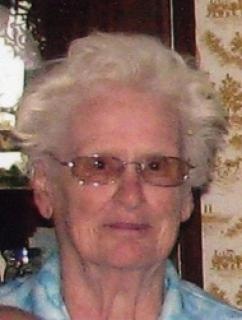 Funeral Services: Will be held on Monday, August 29, 2016, at 10:30 a.m. at the Steen Funeral Home in Fontanelle with burial in the Witt Cemetery, rural Bridgewater. Pastor Lauri Greenlee will officiate the service.

Family Visitation: The family will greet friends on Monday morning one hour prior to services at the Steen Funeral Home in Fontanelle.

Beverly Nadine Pote was born on March 5, 1933, in Washington Township, Adair County, Iowa, the daughter of Clyde and Valda (Goodale) Wyllie. She passed away on Friday, August 26, 2016, at the Greater Regional Hospice Home in Creston, Iowa, at the age of 83.

Beverly attended country school and graduated in 1951 from Bridgewater High School. She was united in marriage to Jake Pote on July 15, 1951. To this union three daughters were born: Penny, Paula and Patty.

Bev worked as a farm wife, gardener and cooked at the Bridgewater Elementary School for 20 years. Bev and Jake spent many hours attending their daughters, grandchildren and great grandchildren school, 4-H and sport activities. Bev attended auctions and garage sales finding many antique treasurers. Bev was a member of the United Methodist Church in Bridgewater. She helped with fall bazaars and quilted for several years with the ladies.

She is preceded in death by Jake, her parents, Jake’s parents Paul and Edna Pote, her step-father George Kordick, and great-granddaughter Odessa Livingston.

The family wants to express a special thank you to Brian and Pam Christensen and Julie and Daryl Christensen for all their help over the years while mom was on the farm. We are forever grateful.

To order memorial trees or send flowers to the family in memory of Beverly Pote , please visit our flower store.