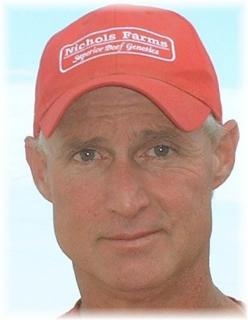 Celebration of Life Services: Will be held on Thursday, January 31, 2013, at 11:00 a.m. at the United Methodist Church in Greenfield. A luncheon will immediately follow the service at the church.

Visitation: Will be held on Wednesday, January 30th, at the United Methodist Church in Greenfield from 2:00 p.m. to 8:00 p.m. with the family greeting friends from 5 to 8 p.m.

Memorials: To the Bill Antisdel memorial fund to be established by the family at a later date.

William (Bill) Dean Antisdel was born December 18, 1957 in Council Bluffs to Gary Dean and Nola Rae (Bengard) Antisdel . He passed away January 24, 2013 at the University of Minnesota surrounded by his beloved family.

They lived in Council Bluffs until Bill was 8 where he attended Roosevelt School. In 1970 they moved south of Bridgewater where he attended Bridgewater Elementary, he graduated from Bridgewater-Fontanelle High School in 1976. After graduation Bill worked for Iowa Star Silos in Adair, in August of 1978 he started working for Don Bennett north of Fontanelle. On September 30, 1978 Bill married Nancy (Noland) Antisdel at the Presbyterian Church in Adair. In the spring of 1979 they moved to Bayard where Bill worked on a hog farm owned by C.W. McCall. January 2, 1980 Bill and Nancy moved northwest of Fontanelle where Bill started working for Nichols Farms, where he remained a loyal and dedicated employee for 33 years.

Bill’s greatest love was his family, he was very proud of his three kids, loved hanging out with them and was crazy about his grandkids. Something that was important to Bill was giving his kids good memories, so he took his family on many vacations. His second greatest love was the Green Bay Packers, he has taken his kids to Lambeau twice, once was just last September when they beat the Bears. He was an avid Cyclone fan and loved the St. Louis Cardinals. When Bill turned 50 he took up golf, and was a member of Crestwood Hills in Anita. His favorite vacation spot was on the English River in Ontario, Canada, Bill & Nancy made the trip many times with friends and family members. Another vacation spot he loved was traveling to Jamaica, the first time was for their 30th anniversary and the second was for his daughter Stacy’s wedding. Bill enjoyed playing cards, pheasant hunting in the fall and coyote hunting in the winter, his CB. nickname was “Wild Bill”. He loved camping with his friends and family, every Labor Day weekend for the past 13 years has been camping with extended family members at the “Tisel Reunion”. Bill lived life to the fullest, loved spending time with his wife and didn’t have many things left to do on his “bucket list”.

He was preceded in death by his grandparents, Dean & Lola Antisdel, mother in law Mary Noland, brother in law Stephen Noland, and nephew Lucas Noland.

To order memorial trees or send flowers to the family in memory of Bill Antisdel , please visit our flower store.