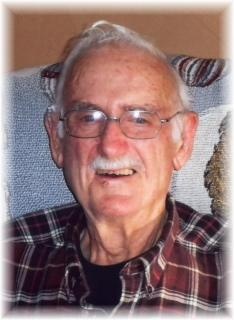 Family Visitation: Will be held on Sunday at the Steen Funeral Home in Greenfield from 4 p.m. to 6 p.m.

Memorials:  May be directed to the Orient United Methodist Church.

Willliam Eugene Harry was born August 31, 1924, the son of Rex Sproll and Golda Veronica (Parkis) Harry in Newton, Iowa. He passed away on Sunday, March 23, 2014, at the Banner Gardens Hospice House in Mesa, Arizona, at the age of 89.

After graduating from Newton High School, “Bill” enlisted in the United States Navy and served during WW II from 1942-1945 as an airplane mechanic. After being discharged from the military he worked for his dad’s dry cleaning business in Greenfield. Bill met Shirley Antisdel in April of 1949 on a “blind date” and they were married in August of the same year. Bill purchased the Sinclair Oil Service Station in Orient until going to work as a rural mail carrier. He retired from the postal service in May of 1985 and spent his winters in Apache Junction, Arizona with his wife Shirley.

Bill enjoyed working in the yard, woodworking and fixing things in his garage. His hobbies include golf, fishing, camping and gardening. Bill stayed very active even in his later years.

Bill particularly cherished his loving wife and five children and centered his life around them. Bill was greatly loved by family and friends in Iowa and Arizona and will be dearly missed.

He was preceded in death by his son, Rick Harry; parents; brother, Ralph Harry; and sister, Wanda Ehrsam.

To order memorial trees or send flowers to the family in memory of Bill Harry , please visit our flower store.