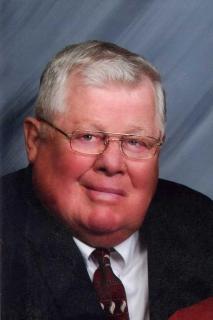 Bill Hensley passed away on Monday, April 4, 2011, at the Cass County Hospice Center in Atlantic.

Memorials: To the Bill Hensley memorial fund to be established by the family.

William Francis Hensley, son of C.B. and Florence (Cullen) Hensley was born on January 23, 1937, on the family farm south of Cumberland, Iowa. He passed away on Monday, April 4, 2011, at the Cass County Hospice Center in Atlantic, Iowa, at the age of 74.

Bill graduated from Cumberland High School in 1955. On November 3, 1956, he was united in marriage to Charlotte Ann Clarke in the St. Timothy's Catholic Church, Reno. With the exception of seven years spent living in Colorado, Bill and Charlotte spent their married life in the Cumberland and Massena area. Bill farmed most of his life and in 1988 went to work for 21st Century Coop. He enjoyed spending time with his kids and grandkids and going to the casino with Charlotte. He was a member of the St. Patrick's Catholic Church, the Knights of Columbus, the Birthday Club, a life long supporter of the Cumberland-Massena Red Sox, and was a member of the Crestwood Hills Golf Course. He loved to tell stories and had the best one liners. He enjoyed golfing and baseball.

He was preceded in death by his parents; wife, Charlotte in 2008; grandson, Weston Wernimont; father and mother-in-law, Ned and Regina Clarke; and brother, Larry Hensley.

To order memorial trees or send flowers to the family in memory of Bill Hensley , please visit our flower store.
Send a Sympathy Card