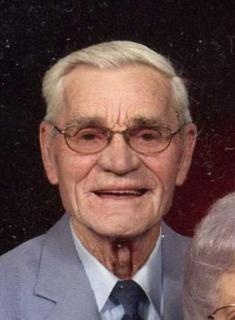 Funeral Services: Wednesday, April 20, 2011, at 10:30 a.m. at the St. Peter’s United Church of Christ, rural Massena with burial in the Victoria Township Cemetery, rural Massena. Full military graveside rites will be held by the Anita American Legion Post No. 210.

Memorials: To the Bill Holste memorial fund to be established by the family.

Bill was raised and lived most of his life near Massena. He was baptized and confirmed in the St. Peter's United Church of Christ. He served his country in the United States Army in World War II and then farmed for years south of Massena on the family farm. He loved his family and farming.

To order memorial trees or send flowers to the family in memory of Bill Holste , please visit our flower store.