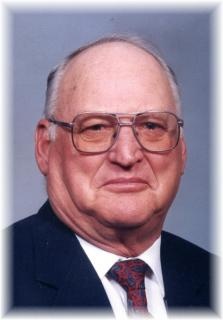 Celebration of Life Services: Will be held on Friday, December 28, 2012, at 10:30 a.m. at the Emmanuel Lutheran Church in Fontanelle with burial in the Greenfield Cemetery. Full military graveside rites will be held at the cemetery by Greenfield American Legion Head-Endres Post No. 265 and V.F.W. Post No. 5357.

Memorials: To the Bill Huff memorial fund to be established by the family at a later date.

William Richard Huff was born on September 4, 1927, in Adair County, Iowa, to William Isaac Huff and Rosa Lundy Huff. He passed away on Monday, December 24, 2012, at Mercy Medical Center in Des Moines at the age of 85.

Bill graduated from Greenfield High School in 1946. Bill was a great sports enthusiast and was a star football player in high school. He was baptized into the Christian faith in 1950 at First Presbyterian Church in Greenfield and confirmed his faith at Emmanuel Lutheran Church in Fontanelle in 1963. He remained an active member at Emmanuel until his passing. He lived his life as a true example of always loving your neighbor.

Bill farmed with his father and then for his mother. On February 24, 1952, Bill was married to Norma Queck. They became the parents of four children: James, Rosanne, David and Mary. He served in the US Army from 1954 until 1956, stationed primarily in Puerto Rico. In 1962 he purchased an acreage just west of Greenfield, where he and his family have lived for more than 50 years. He owned and operated Greenfield Welding for more than 20 years in the 1970s, 80s and 90s. For many years he also supplemented his family’s income by laboring as a sheep shearer. He loved and was skilled at woodworking and created many works of art. His grandkids were his special hobby and he was extremely proud of each of them. He was known for making “special” gifts for them, including doll houses, barns, go-carts and other items. He loved the outdoors and found enjoyment in hunting, especially coyote, deer, pheasant and waterfowl. He also loved to fish, and he loved teaching his grandkids to fish. He gardened extensively, and was especially fond of growing (and sharing) his own watermelon. He was very active in his church, helping make numerous improvements and always willing and able to do whatever was needed for the good of the church. This willingness included his service in multiple terms in various offices of church leadership. He was a member of the local Optimist Club and the American Legion, again always lending a helping hand.

Bill was known to all for his generous heart, his sly sense of humor, and his amazing ability to work long, hard, and skillfully. He also had an unwavering ethical stance for “doing the right thing” and treating everyone with honesty. Bill led his family by example and he had fun living his life. His smile and the sparkle in his eyes were his trademarks.

He is survived by his loving wife of more than 60 years, Norma of Greenfield; his four children, James Huff and wife Barbara of Vashon, Washington, Rosanne Burg and husband Daniel of Papillion, Nebraska, David Huff and wife Kendalyn of Greenfield, and Mary Johnson and husband Brian of Alexandria, Virginia; thirteen grandchildren, three step grandchildren, seven great-grandchildren, one step great-grandchild; and his sisters Mary Eason and Delores Havens. He was preceded in death by his parents, his sister Violet Williamson, and an infant brother Donald.

To order memorial trees or send flowers to the family in memory of Bill Huff , please visit our flower store.
Send a Sympathy Card