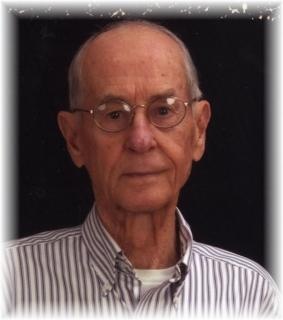 Bill Wolfe passed away on Wednesday, May 30, 2012, at the Mercy Medical Center–West Lakes in West Des Moines, Iowa.

Funeral and Masonic Services: Will be held on Saturday, June 2, 2012, at 10:00 a.m. at the First Presbyterian Church in Greenfield with burial in the Greenfield Cemetery. Pastor David Kincaide will officiate the service.  The Greenfield Crusade Lodge No. 386 A.F. & A.M. will conduct the Masonic Service.

Memorials: To the Bill Wolfe memorial fund to be established by the family.

Elmer William Wolfe was born October 9, 1922, to Ellis William and Elizabeth Ellen (Peers) Wolfe in Greenfield, IA and passed away May 30, 2012.

Bill married Mary Christine Brown on April 5, 1968, at the Westminster Presbyterian Church in Des Moines. They were the parents of one daughter, Robin Christine. Bill was a lifelong resident of Adair County until February 2012, when he moved to Kennybrook Village in Grimes to be near his daughter and family.

Bill was a life time member of the First Presbyterian Church in Greenfield where he served as a church elder and regularly attended for many years.

After retirement, Bill continued to make daily trips to Greenfield to the farm to check the crops and the cattle. He also enjoyed drinking coffee in the morning at the Greenfield Co-op with the other farmers. He loved spending some of the winter months with his sister, Ethelyn, in California, and loved traveling with his family. He always loved to go, but looked forward to getting back home. He had a special place in his heart for his two grandchildren, Miles Christopher and Lauren Ellen. He waited a long time to become a grandparent. As long as it was possible, he attended their ballgames, school and church programs and birthday events. He taught Miles to mow grass using the riding lawn mower at the farm and both children loved to ride with grandpa in his little brown pickup. The visits of Chad and Robin and the grandchildren were gifts of joy to Bill.

To order memorial trees or send flowers to the family in memory of Bill Wolfe , please visit our flower store.
Send a Sympathy Card