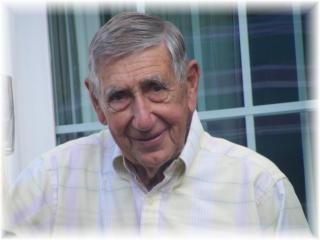 Services: A Celebration of Life Fellowship and Luncheon will be held on Saturday, June 22, 2013, at the Cumberland Community Center at 12 noon for all family and friends. Private family memorial services and burial will be held prior to the Celebration of Life Fellowship. Full military graveside rites will be held at the Greenwood Cemetery by the Anita American Legion Post No. 210. The Steen Funeral Home in Massena is in charge of the professional arrangements.

Memorials: The family requests memorials be made to the donor’s favorite charities in lieu of flowers.

Bob graduated from Cumberland High School in 1940. He attended Simpson College in Indianola, Iowa. On March 18, 1943, he joined the U. S. Army and on October 30, 1943, he married Virginia Garside at the Methodist Chapel in Bloomington, Indiana, where he was stationed with the U. S. Army.

Bob was a very proud man who never met a stranger!!! He could visit with anyone at any time and always enjoyed doing just that. He was the ‘voice’ of the C & M football team from its start until the reorganization with Anita and still did a game or two for the CAM team as well – then passing that position down to his grandson, Shane. He enjoyed being a ‘snowbird’ and wintered in Cocoa Beach Florida for over 30 years with his ‘Florida Family’ and friends. He traveled with his son-in-law during these trips and was able to show Kenney the best ‘places to stay and the roads to travel’ between Iowa and Florida. He loved his special Sunday morning coffees, golfing with his buddies and spending as much time as possible with his family. He was more than a gentleman – he was a gentle man.

Bob was preceded in death by his parents, his wife of 68 years, Virginia, his son, Bruce, and one brother-in-law, Dale.

To order memorial trees or send flowers to the family in memory of Bob Rogers , please visit our flower store.