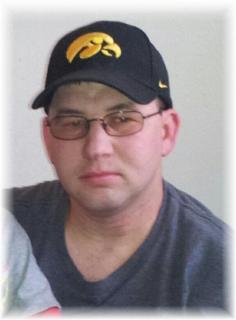 Brian Chambers passed away on Monday, October 14, 2013, at the Greater Regional Hospice Home in Creston.

Mass of the Resurrection: Will be held on Friday, October 18, 2013, at 10:30 a.m. at the St. John’s Catholic Church in Greenfield with a luncheon immediately following the mass and then burial in the Graceland Cemetery in Creston. Father Ken Gross will officiate the service.

Memorials: To the Brian Chambers memorial fund to be established by the family at a later date.

Brian Scott Chambers was born May 25, 1978, the son of David and Phyllis (Breheny) Chambers at the Adair County Memorial Hospital in Greenfield, Iowa. He passed away on Monday, October 14, 2013, at the Greater Regional Hospice Home in Creston, Iowa, at the age of 35.

Brian grew up and lived his entire life in Adair County. He graduated from Nodaway Valley High School in 1997. After high school he went to work for Cardinal IG and worked full time until March of 2013.

He was preceded in death by his daughter, Jewels Renae Chambers in 2008; paternal grandparents, Zene and Margaret Chambers; and maternal grandfather Vincent Breheny.

To order memorial trees or send flowers to the family in memory of Brian Chambers , please visit our flower store.
Send a Sympathy Card