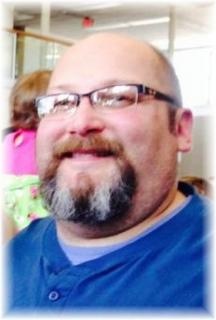 Funeral Services: Will be held on Tuesday, August 19, 2014, at 11:00 a.m. at the Emmanuel Lutheran Church in Fontanelle with burial in the Fontanelle Cemetery. Pastor Steven Broers will officiate the service. A luncheon will follow the burial at the church.

Memorials:  Memorial contributions will be placed in an educational fund for his children.

Brian Douglas Feick was born March 1, 1971, the son of Richard and Dorene (Gehrtz) Feick in Winterset, Iowa. He passed away on Wednesday, August 13, 2014, at the Iowa Methodist Medical Center in Des Moines, Iowa, at the age of 43.

Brian was raised in Adair County and grew up southwest and north of Fontanelle. He graduated from Bridgewater-Fontanelle High School in 1989 and went on to college at Southwestern Community College in Creston and earned a business management degree at Des Moines Area Community College.

Brian worked at O’Reilly’s Distribution Center in Des Moines as the maintenance supervisor. He enjoyed Chevy cars (Chevelle), Notre Dame football, Garth Brooks, Iowa State Cyclones, Dallas Cowboys, Star Trek Scifi genre, country and 80’s music, deer hunting, bow hunting, comic genre (book and movies), action and horror movies. He loved baking and making birthday cakes and decorated Christmas cookies for his kids, which were more intricate each year. He was a kid at heart. His kids, Courtney and Logan, were the biggest part of his life and heart. He considered everyone first and himself last, making sure everyone was taken care of.

He was preceded in death by his grandparents, Elbe and Florence Gehrtz and Edwin and Helen Feick; great uncle and aunt, Don and Emilie Rogers; uncle, Dennis Gehrtz and Tom Hughes; cousins, Burton Gehrtz, Ronald Rater and Robert Rater.

To order memorial trees or send flowers to the family in memory of Brian Feick , please visit our flower store.
Send a Sympathy Card