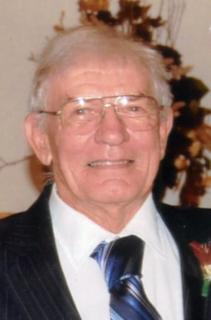 Funeral Services: Will be held on Wednesday, September 28, 2016, at 10:30 a.m. at the Emmanuel Lutheran Church in Fontanelle with burial in the Fontanelle Cemetery. Full military graveside rites will be conducted by the Fontanelle American Legion Carlson Post No. 247 and Greenfield American Legion Head-Endres Post No. 265 and V.F.W. Post No. 5357. Pastor Steven Broers will officiate the service. A luncheon will be held at the church following the burial.

Open Visitation: Will be held on Tuesday, September 27th, from 12:00 p.m. to 8 p.m. at the Steen Funeral Home in Greenfield.

Family Visitation: The family will greet friends on Tuesday evening at the Steen Funeral Home in Greenfield from 6 to 8 p.m.

Memorials: To the Bruce Brown memorial fund to be established at a later date.

Bruce Kendall Brown was born December 26, 1931, the son of Otto and Ella (Houchin) Brown in Prussia Township, Adair County, Iowa. He passed away on Saturday, September 24, 2016, at the Adair County Memorial Hospital in Greenfield, Iowa, at the age of 84.

Bruce graduated from Fontanelle High School in 1950. He served his country in the United States Army in the 43rd division from November of 1952 to October of 1954. On August 26, 1956, he was united in marriage to Delores Lary at the Emmanuel Lutheran Church in Fontanelle, Iowa. To this union four children were born: Darla, Steve, Scott and Jayne. He farmed north of Fontanelle and was a crop adjuster for the USDA in Greenfield retiring in 1994. They moved to Greenfield in 1997 where he still resided. He was an active member of the American Legion and V.F.W. serving as past commander. He loved going to auctions, old equipment (especially tractors) and he was a very good welder.

He was preceded in death by his parents; wife, Delores in 2005; sister, Norine McDermott and three brothers-in-law, Tom McDermott, Jim Dixon and Wayne Lary.

To order memorial trees or send flowers to the family in memory of Bruce Brown , please visit our flower store.
Send a Sympathy Card