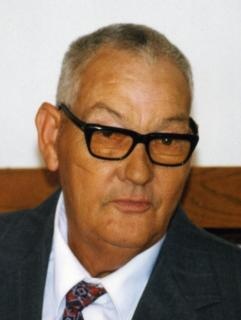 Graveside Services: Will be held on Friday, April 22, 2016, at 10:30 a.m. At the Fontanelle Cemetery. Full Military graveside rites will be conducted by the Fontanelle American Legion Carlson Post No. 247. Pastor Cathy Nutting will officiate the service. The Steen Funeral Home in Fontanelle is in charge of the professional arrangements.

There will be no public visitation.

Memorials: To the Bud Jones memorial fund to be established by the family at a later date, in care of Steen Funeral Home, PO Box 390, Greenfield, Iowa 50849.

Merrill Claire “Bud” Jones was born January 4, 1932, to Virgil and Carolyn (Harsh) Jones in Madison County, Iowa. He passed away on Thursday, April 14, 2016, at the Alegent Creighton Mercy Hospital in Corning, Iowa, at the age of 84.

Bud attended country school in Madison County thru the eighth grade. On July 7, 1953, he was united in marriage to Wilma J. Huddleson in the Fontanelle Methodist Parsonage. Bud and Wilma traveled for two years while Bud served in the service.

They lived in Adams County while Bud worked for a farmer. They moved to Bridgewater where Bud worked at the elevator. They made their permanent home in Fontanelle. At that time Bud was employed at Schildberg’s driving a road truck for many years. Bud also was the Fontanelle town cop for several years.

Bud and Wilma were foster parents for years and took in around thirty-five children over the years. In 1987, Bud and Wilma adopted April Jean Jones as their daughter.

He was preceded in death by his parents; wife, Wilma; three sisters, Ruth Noble, Lucille Davis and Harriett Thompson; and two brothers, Lyle and Pearl Jones.

He is survived by his daughter, April Pierce and husband Kevin of Creston, Iowa; sister-in-law, Marilyn Huddleson of Fontanelle; many nieces, nephews, great nieces, great nephews, foster children and a special friend Ruth Breach of Prescott, Iowa; other relatives and friends.

To order memorial trees or send flowers to the family in memory of Bud Jones , please visit our flower store.
Send a Sympathy Card