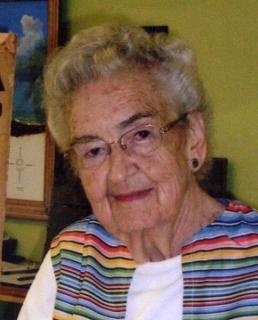 Services:  Private family graveside services will be held in 2017 when the beauty of spring blooms alive again.

Byrlee Ada Jensen was born September 18, 1930 in Adair County, the daughter of William A. and Carrie E. (Lundy) Short.

Byrlee and Dale farmed for the first 13 years of marriage. They had a farm auction in 1961 and became owner and operator of the Tastee Freeze Drive In at Greenfield. In 1974, they moved to Bella Vista, Arkansas where Byrlee was employed and retired in 1995 from the Wal-Mart home office in Bentonville. After 25 years living in Bella Vista, they returned to Greenfield in 1998 to be near son, Jerry, wife, Karen, and grandsons, Matthew and Christopher.

In addition to the Greenfield United Methodist Church, she was a member of the American VFW Auxiliary, American Legion Auxiliary, and the Adair County Hospital Auxiliary. Byrlee treasured the time with her family, making crafts, quilting, crossword puzzles, playing cards, shopping trips, and you could always count on that she would have some freshly baked cookies for you.

On Monday, December 5, 2016, at the age of 86 Byrlee passed away at the Good Samaritan Society in Fontanelle, Iowa.

Those left to honor her memory include her son, Jerry (Karen) Jensen of Bettendorf; her grandsons, Matthew and Christopher; sister-in-law Donna Short; nieces, nephews, cousins, and friends.

In addition to her husband, Byrlee was preceded in death by a son, Gary; her sister Grace Morris; and her brothers Claire, Virgil, Dale, and Earl Short.

The family wishes to thank the staff at the Good Samaritan Society of Fontanelle and the St. Croix Hospice for all their care, love, and attention. And words cannot begin to express our special thanks to Sybil Richardson, Rick Jensen, Jane Sullivan, all of her neighbors, and all of you who helped Byrlee during the years that she lived in the retirement village in Greenfield.

According to her wishes, the rite of cremation has taken place.

Memorials may be made in Byrlee’s honor to the Good Samaritan Society of Fontanelle or to the Greenfield United Methodist Church.

To order memorial trees or send flowers to the family in memory of Byrlee Jensen , please visit our flower store.