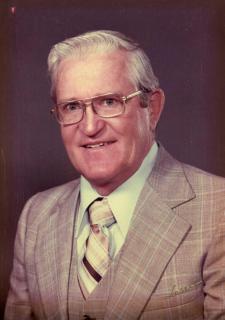 Funeral Services: Monday, September 19, 2011, at 11:00 a.m. at the Orient United Methodist Church in Orient with burial at the Orient Cemetery. Full military graveside rites will be conducted by the Williamson American Legion Post No. 719. Online condolences may be left to the family at www.seenfunerals.com.

Memorials: To the Orient Plymouth Congregational Church or to the Williamson American Legion Hall.

Carl Nels Campbell was born May 5, 1927, to Howard and Lulu (Calwell) Campbell in rural Bridgewater, Iowa. He was one of eleven children. Carl passed away September 15, 2011, at the Adair County Memorial Hospital in Greenfield at the age of 84.

Carl attended Avondale School and graduated from Orient High School. After graduation, he joined the Army and was a member of the Williamson American Legion. On September 22, 1946, he was united in marriage to Flora Weed in Orient, Iowa. To this union four children were born, Jeff, Carla, Roger and Ellen. The family lived on a farm near Orient. In addition to farming, Carl operated Campbell Brothers Trucking. He loved his family and his farm and enjoyed fishing and playing cards with friends.

He was preceded in death by his parents; brothers, Joe, Emmett, Harold, Fred, Bob and Toby; sisters, Merna, Lela, Ileen and Zola (infant).

To order memorial trees or send flowers to the family in memory of Carl Campbell , please visit our flower store.
Send a Sympathy Card