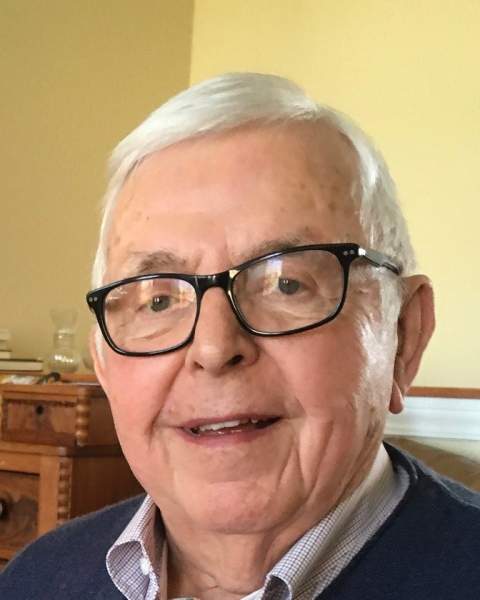 Celebration of Life Services:  Will be held on Saturday, September 3, 2022, at 10:30 a.m. at the Zion Lutheran Church in Muscatine, Iowa.  Family will be present an hour before the service for visitation.  Pastor Willie Rosin will officiate the service.  A luncheon will be held at the church immediately following the service.

Graveside Services:  Will be held on Sunday, September 4, 2022, at 1:00 p.m. at the Greenfield Cemetery in Greenfield, Iowa with full military graveside rites conducted by the Greenfield American Legion Head-Endres Post No. 265 and V.F.W. Post No. 5357 and Masonic Services held by the Greenfield Crusade Lodge No. 386 A.F. & A.M.  Pastor Melinda Stonebraker will officiate the service.  A luncheon will be held at the Greenfield United Methodist Church following the committal services.  The Lamb Funeral Home in Greenfield is in charge of the professional arrangements.  Online condolences may be left to the family at www.lambfuneralhomes.com.

Memorials: May be directed to the Minnesota Lions Vision Foundation.  Website: Donations can be made online.  There is also a form that can be printed and a mailing address is included.  https://www.mnlionsvisionfoundation.org/donate/

Carl Alfred Carlson, of Muscatine, IA, formerly of Battle Lake, MN, and Greenfield, IA, entered eternal rest August 27, 2022 after heart disease and a traumatic brain injury.
Carl, son of John Marion and Thelma Lois Carlson, was born December 28, 1933 at the home of his grandparents, Orley and Sidna Havens, in Lee Township of Adair County, IA. He graduated from Greenfield Community High School and Simpson College, Indianola, IA.  In 1966 he married Judith Jane Schomberg in Letts, IA.  They were blessed by the birth of two children: Donovan Marion and Sara Ellen. His interest in business activities began as a Des Moines  Register carrier. He learned the dry cleaning business in Greenfield. Following college graduation, his first job was with the Firestone Tire and Rubber retailing division.  He enjoyed playing TAPS at burials for veterans in Greenfield, IA.  He served in the United States Army in the Public Information Department of Walter Reed Army Hospital in Washington, D.C.
After he was discharged from the Army, he moved into the food business at the Greenfield Maid Rite Café with his father, then expanding in 1960 to Carlson’s Super Valu Supermarket.  The business was sold in 1993. He was so fortunate to work with many dedicated and skillful employees in both businesses. The next year Carl and Judy moved to their scenic lake home near Battle Lake, MN.  Carl belonged to the United Methodist Church, Greenfield, IA, Eagle Lake Lutheran, Battle Lake, MN and Zion Lutheran, Muscatine, IA. He sang in choirs and male quartets.  He was a certified lay minister in the United Methodist Church.
Carl restored old cars with his friend, Lloyd Ray. He drove them in many parades. In 1971 he was the Iowa State Fair Cookout King.
Carl was a past Master of Greenfield’s Crusade Lodge #386.  He served on the Greenfield City Council.  He was one of the founding partners of a nursing home in Greenfield, IA. He was very active in Battle Lake Lions Club serving in several leadership positions including working with Jim Bailey to start the annual sale of Colorado grown peaches. That has proven very successful as an annual fund- raiser. He baked many loaves of whole grain yeast breads for his family, gifts and donations to community fundraisers.
About a decade ago they moved to Muscatine, IA.  His business enterprise melded well with the purchase of farmland near Letts, IA, custom farmed by Judy’s first cousin, Riley Padgett, in cooperation with Hertz Farm Management.
Survivors are his wife of 56 years, Judy, son, Donovan (Susan) West Salem, WI, daughter, Sara Comstock (Scott), Muscatine, IA and granddaughters Laura Kate and Anna Grace Comstock. Others include brother-in-law Steven (Janie)
Schomberg, Iowa City, IA and sister-in-law Nancy (Glenn) Abney, Tucker, GA, nieces, nephews, and other relatives.
Our thanks to his caregivers: Paula Strums, Cindi Naber, Robin Haling, Afi Awoussi, Dorene Weikert, staff at Pinnacle Group Home, Muscatine, IA and St. Croix Hospice.

To order memorial trees or send flowers to the family in memory of Carl Carlson, 88, of Muscatine (formerly of Greenfield), please visit our flower store.

A luncheon will immediatley follow the service at the church.

Full military graveside rites conducted the Greenfield American Legion Head-Endres Post No. 265 and V.F.W. Post No. 5357 and Masonic Services held by the Greenfield Crusade Lodge No. 386 A.F. & A.M. Pastor Melinda Stonebraker will officiate the service. A luncheon will be held at the Greenfield United Methodist Church following the committal services.