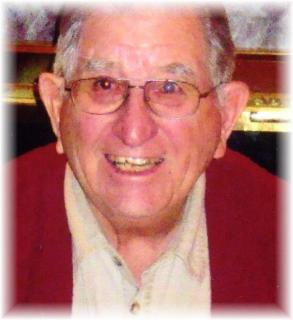 Funeral Service: Will be held on Saturday, December 13, 2014, at 11:00 a.m. United Methodist Church in Cumberland with burial in the Victoria Township Cemetery, south of Massena, Iowa. Pastor Casey Pelzer will officiate the service. A luncheon will follow the burial at the Cumberland Community Building.

Family Visitation: The family will greet friends at the church one hour prior to services.

Carl LeRoy Symonds was born December 18, 1919, in Victoria Township, Cass County, Iowa, the son of Ernest John and Mary Angelina (Walker) Symonds. He passed away on Wednesday, December 10, 2014, at the New Homestead in Guthrie Center, Iowa, at the age of 94.

Carl was raised and grew up in Massena. He attended school through the eighth grade at the Victoria Township Country School. He was united in marriage to Bernice Rich on August 12, 1940, in Maryville, Missouri. To this union four children were born: Patricia, Shirley, Robert and Richard. They farmed from 1953 to 2000.

He was preceded in death by his parents; brothers, Russell, Robert, Dale, Francis and an infant brother; and sister, Belle Holste.

To order memorial trees or send flowers to the family in memory of Carl Symonds , please visit our flower store.
Send a Sympathy Card