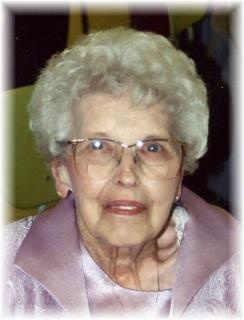 Mass of the Resurrection:  Will be held on Friday, August 22, 2014, at 10:30 a.m. at the St. John’s Catholic Church in Greenfield with burial in the Greenfield Cemetery. Father Ken Gross will officiate the service.

Memorials: To the St. John’s Catholic Church or to the Greenfield Meals on Wheels.

Carmelita Augusta Flickinger, daughter of John and Lena Bissen was born March 22, 1917, in Earling, Iowa. She passed away on Friday, August 15, 2014, at the Greenfield Manor in Greenfield, Iowa, at the age of 97.

Carmelita attended St. Joseph’s School graduating from St. Joseph’s High School in 1935. She went on to attend Commercial Extension Business School in Omaha, Nebraska. She worked at Roberts Dairy and in the purchasing department of the Glenn L. Martin plant during World War II. On June 10, 1946, she was united in marriage to Dr. Charles Flickinger at St. Joseph’s Church in Earling, Iowa. They resided in Greenfield where Charles practiced veterinary medicine.

Carmelita was a member of St. John’s Catholic Church, St. Joseph’s Council of Catholic Women, Greenfield Progress Club, American Legion Auxiliary, the Adair County Memorial Hospital Auxiliary and the Adair County Historical Society. She was a Girl Scout and Boy Scout leader, catechist and Eucharistic minister. Some of her favorite activities included family vacations, visiting family and friends, and welcoming her children and grandchildren into her home. She also enjoyed gardening, crocheting, embroidering and traveling.

To order memorial trees or send flowers to the family in memory of Carmelita Flickinger , please visit our flower store.