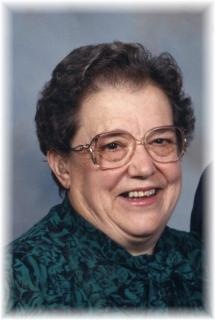 Funeral Services: Will be held on Thursday, March 28, 2013, at 10:30 a.m. at the Emmanuel Lutheran Church in Fontanelle with burial in the Fontanelle Cemetery. A luncheon will follow the burial at the church.

Carol Marie Queck Hyda was born November 5, 1922 to Christian Henry Paul Queck and Pauline Elizabeth (Miller) Queck at their farm northeast of Bridgewater, Iowa. She passed away March 24, 2013 at the Good Samaritan Society in Fontanelle at the age of 90. She was baptized on November 26, 1922 and confirmed on March 21, 1937 at the Emmanuel Lutheran Church in Fontanelle by Rev. William Kurtz.

At the age of 4 1/2, Carol became ill with polio. She recovered sufficiently that few realized that she had been afflicted. In 1927, she and her parents moved to a farm in Richland Township which they purchased. She continued her education at Richland Consolidated School and graduated in 1940. She continued her education at Grand Island Business College in Nebraska. That next fall she was offered the position of bookkeeper at the Greenfield Creamery. She returned home to work for them. On December 3, 1942, she married Henry L. Hyda. To this union two children were born, Kathleen Ann and Henry Leroy, Jr. Henry and Carol farmed on the Hyda century farm in Summerset Township for over fifty years.

Carol was busy in community affairs including 4-H, Farm Bureau, teaching Sunday School, singing in the church’s choir and the American Legion Auxiliary. In 1960, she began working at the U.S. Post Office and continued working until her husband’s health forced her to be home with him.

Carol was always the happiest when with her family and friends. She took great pride in the running of her home and welcomed visitors.

In 1985, Carol and Henry moved to their home in the town of Fontanelle where they continued to be active in community affairs. In July 2003, they entered the Good Samaritan Society.

Memorials: To the Good Samaritan Society and Emmanuel Church in Fontanelle.

To order memorial trees or send flowers to the family in memory of Carol Hyda , please visit our flower store.
Send a Sympathy Card