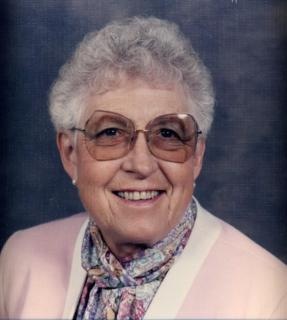 Memorials:  To the Carol Nielsen memorial fund to be established by the family.

Carol was baptized and confirmed at the Fontanelle United Methodist Church, then joined the Avondale United Methodist Church later in life. Carol lived on a farm southeast of Fontanelle with her family and graduated from Fontanelle High School in 1942. She was united in marriage on December 19, 1942 to Charles Wilbur Nielsen. To this union two children were born, David Charles and Janice Carol. Charles and Carol made their home on a farm one mile east of Avondale until Charles' death in May of 1954. Carol moved to Fontanelle with her two young children where she resided until her death.

Carol worked at Strom's Grocery after moving to Fontanelle in 1954 then went to work as the Adair County Deputy Recorder in 1957 until she was elected as the Adair County Recorder. She remained in office until her retirement in 1994. Carol was dedicated to her work and enjoyed building many friendships throughout her years as Recorder.

In Carol's younger years, she enjoyed bowling, sewing, knitting and crocheting. In retirement, she enjoyed traveling and volunteer work for her church and other organizations. She was a member of the Avondale United Methodist Church, United Methodist Women (UMW), The Sunshine Club, The Optimists, the Fontanelle Women's Club, the Historical Society and the GSC Auxiliary.

She was preceded in death by her parents, Ralph and Lucy; husband, Charles; daughter, Janice in 2006; sister, Esther; and brother-in-law, Calvin.

To order memorial trees or send flowers to the family in memory of Carol Nielsen , please visit our flower store.
Send a Sympathy Card