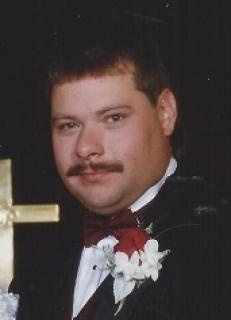 Celebration of Life Services: Will be held on Saturday, June 12, 2021, at the Emmanuel Lutheran Church in Fontanelle, Iowa, at 2:00 p.m. with burial at a later date. Please feel free to wear Iowa Hawkeye, Dallas Cowboy or Bridgewater-Fontanelle attire to the service. Pastor Steven Broers will officiate the service. The Steen Funeral Home in Fontanelle is in charge of the professional arrangements.

Memorials: Memorials may be directed to Chad Edwards memorial fund to be established by the family at a later date.

Chad was raised and continued to live in Fontanelle, Iowa, on the acreage that he grew up on. He graduated from Bridgewater Fontanelle High School with the class of 1988. He was active in football, basketball, FFA, served as FFA Vice President, was on the FFA Sentinel and in the Letterman's Club all throughout High School. He worked at Krieg Boys Ice from 1986 until 1999, when he started working for Southern Iowa Vending until present.

Chad and Kathy dated for ten years before getting married on October 2, 1999, at the United Methodist Church in Menlo, Iowa, they enjoyed spending their time together, whether it was being at home, with family and friends or going on day trips or vacations.

Chad had many names that he went by besides his given name, Chuck, Chuckles, Charlie, and Shark, are just a few. He enjoyed playing cards, pool, fantasy football, win or lose he was cheering on his teams the Dallas Cowboys and Iowa Hawkeyes Football and Men's Basketball, listening to music and to sport talk shows, watching movies and Sound Off on Sunday nights, woodworking, do it yourself projects, he was great with electronics and never gave himself enough credit for his knowledge, spending time outside whether it be mowing, working in the yard or sitting on the deck.

The family wishes to express their gratitude for all the acts of kindness shown to them in their time of sorrow and invite you to share in food and fellowship at the Greenfield Golf and Country Club following the service at the church.

To order memorial trees or send flowers to the family in memory of Chad Edwards , please visit our flower store.
Send a Sympathy Card