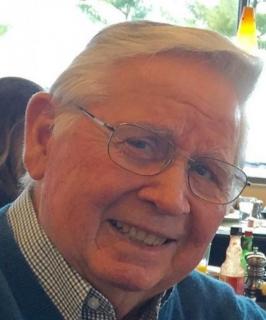 Celebration of LifeServices: Will be held on Saturday, September 18, 2021, at 10:30 a.m. at the Emmanuel Lutheran Church in Fontanelle, Iowa, with burial in the Fontanelle Cemetery. Full military graveside honors will be conducted by the Fontanelle American Legion Carlson Post No. 247. Pastor Cathy Nutting will officiate the service. A luncheon will be held at the Fontanelle United Methodist Church following the services. The Steen Funeral Home in Fontanelle is in charge of the professional arrangements.

Family Visitation: The family will greet friends on Friday, September 17, 2021 at the Emmanuel Lutheran Church in Fontanelle from 5:00 p.m. to 7:00 p.m.

Memorials: Memorials may be directed to Chuck Cummins memorial fund to be established by the family at a later date.

Charles, “Chuck,” Cummins was born January 26th, 1934 in Fontanelle, Iowa to Charlie and Ione Cummins in the family home. He passed away September 15th, 2021 at Adair County Memorial Hospital in Greenfield at the age of 87.

Chuck graduated from Fontanelle High school in 1951. He was drafted into the Army just after starting his freshman year of college. After his father died in an auto accident, Chuck returned home after an honorable discharge to take over the family business.

On July 26th, 1955 he was united in marriage to Marlene Smutz. Four children were born to this union: Craig, Kaye, Susan, Alecia. They made their home near and in Fontanelle.

Chuck’s passion was looking at the land and making it better for the area farmers by tiling, adding terraces, and building ponds. In addition to the construction projects, he farmed and tested the waters on several other business ventures. He loved supporting the community whenever he could by donating time and machines to whatever the need was. He was a devoted husband, father, grandfather and friend.

He was a member of the local American Legion, Legion Honor Guard, Conservation Board, BF School Board, Fontanelle City Council, member of the Masonic Temple, and he was a Master Mason.

Other things he loved were music and dancing, cars, pitching fast-pitch softball, watching the Hawkeyes and Chicago Cubs, coffee with the guys, talking politics, bird watching, reading and Sunday drives to check the crops. We all knew that Chuck sometimes had a temper but it was balanced out by his great sense of humor and love for jokes and laughter.

He was preceded in death by his parents, his wife Marlene in 2007, son Craig in 2012 and 2 of his siblings, Lois Prunty and Merle Cummins.

To order memorial trees or send flowers to the family in memory of Charles Cummins , please visit our flower store.
Send a Sympathy Card