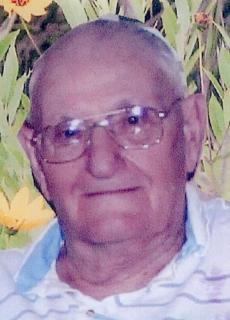 Celebration of Life Services: Will be held on Sunday, September 15, 2019, at 1:30 p.m. at the United Methodist Church in Greenfield. A luncheon will be held at the church immediately following the services. Pastor Eric Schubert will officiate the service.

Memorials: May be directed to the Charles Harris memorial fund to be established by the family at a later date.

Charles Edmund Harris, Jr. was born October 17, 1925 in Adair County Greenfield Iowa to Charles and Dorothy (Gaskill) Harris. Passed away on September 5, 2019 at the Greenfield Nursing and Rehabilitation Center at the age of 93 years 10 months and 19 days.

He graduated in 1944 from Greenfield High School. He lived most of his life in Greenfield. After graduation Charles was drafted into the Navy on July 19, 1944. He served his WWII tour on the S. S Thomas B King . He was stationed at numerous locations. He was honorably discharged on July 11, 1946. He was proud to serve his country. He was a member of the American Legion Post 265 for 74 years.

On December 28, 1946 he was united in marriage to Letitia Mae Morgan in Hiawatha Kansas. They celebrated their 72nd wedding anniversary last December. Charles and Letitia had a very loving devoted bond. Six children were born to this union. Joni Grace, Lori Jane, Julia Ann, Dorothy Lorraine, Charles Edmund III, and John Leroy. His morning routine was going to the Co-op for coffee, visiting the Pool Hall for a game of Snooker and visiting his Great Aunts!

They lived all their married life in Adair County farming for a number of years until retirement in 1990. For 10 years they were able to travel in their Southwind Motor home. They spent their summers in Minnesota and winters in McAllen Texas. They were able to travel throughout the United States and into Canada. Many years they stayed at Round Bay Resort in Nevis Minnesota where they had a home. They loved to fish and go up to the lodge and visit with their many friends. Charles accepted Christ as his personal Lord and Savior just before his 90th birthday.

Charles and Letitia bought a home in Greenfield where they lived for 20 years. He loved looking at his birds and feeding them. He enjoyed keeping an eye on his neighbors and loved visits from them. His pride and joy were his children, grandchildren and great grandchildren. He loved being involved in their lives and giving them help and guidance. He always had a dollar bill to give to his great grandchildren when they came to visit. He would sneak them a treat. He always enjoyed holding them as babies. Talking to them and getting them to laugh.

Last September Charles and Letitia moved into the nursing home where he enjoyed visiting with the many nurses and CNA’s that cared for him. He also enjoyed having the nurses, CNA’s and the Pastor from Greenfield Care Initiatives Hospice. He loved picking on each one of them and enjoyed when they picked back on him. He developed a strong bond with them and it meant a lot to him their loving care they provided.

He was preceded in death by his parents, a daughter Lori Jane Darling, a grandson Jesse James Porter and granddaughter Crystal Mae Phillips. Also his brother Wayne Harris and sister Shirley Meng.

To order memorial trees or send flowers to the family in memory of Charles Harris , please visit our flower store.
Send a Sympathy Card