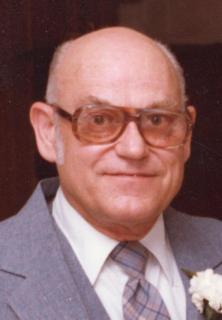 Private Family Graveside Services: Will Be Held at the Greenfield Cemetery with full military rites conducted by the Greenfield Head-Endres American Legion Post No. 247 and V.F.W. Post No. 5357.

Memorials: Memorials may be made to the Charley Hahn memorial fund to be established by the family.

Charley was born to Peter and Mildred (Zeich) Hahn on March 18, 1925 in Los Angeles County, CA. He grew up in Riverside, California and attended Thomas A. Edison High School. Charley was called to serve his country at the age of 18. He joined the Navy where he served as a radio operator on the USS Astoria during WWII. Charley completed his training at Texas A&M and remained a licensed radio operator until the age of 90.

In 1948, Charley began to exchange letters with a woman he met at a family get together. They continued to correspond via mail for four years before tying the knot. On May 7, 1953 Charley married Helena (Pfaff) Hahn. To this union three children were born: Timothy, Thomas, and Elaine. They raised their children in Oxon Hill, MD where they resided for 51 years before relocating to Greenfield, IA. Charley was employed as an electrical design engineer, designing and building aircraft and train simulators.

Charley was a dedicated and loving husband and father. In his spare time, he loved to work on cars, electronics and woodworking projects. He was a hard worker and was always willing to help others. Charley loved to play the harmonica and the accordion for friends and family which was enjoyed, especially by his wife. Throughout his adult life, Charley held an unwavering faith in God which was evident to all those around him. His kind and patient demeanor was a great testament to the love of his savior.

Charley was preceded in death by his wife, Helena Hahn, his parents, brothers Peter and Frank Hahn and sister Christine Free.

To order memorial trees or send flowers to the family in memory of Charley Hahn , please visit our flower store.
Send a Sympathy Card