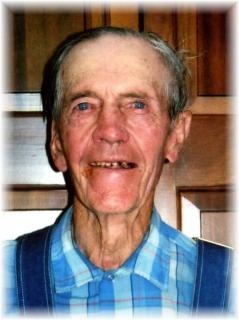 Funeral Services: Will be held on Thursday, May 28, 2015, at 11:00 a.m. at the Massena United Methodist Church in Massena with burial in the Victoria Township Cemetery, south of Massena. Full Military Graveside Rites will be conducted by the Anita American Legion Post No. 210.  Pastor Laurel Westerkamp will officiate the service. A luncheon will be held at the church following the services at the cemetery.

Family Visitation: The family will greet friends on Thursday one hour prior to services at the church.

Memorials: To the Chester Swain memorial fund to be established by the family at a later date.

Dad attended Victoria Township rural country school thru’ the 8th grade. He did farm work for many area farmers prior to serving in the 394th Fighter Squadron of the Ninth Army Air Force as an airplane engine mechanic during World War II in Normandy, France and Germany. He was honorably discharged September 15, 1945 and was privileged to be on the first Honor Flight from Council Bluffs to visit the World War II Memorial in Washington, DC.

On April 14, 1944 Dad was united in marriage to Ruby Mae Kinser in Omaha, Nebraska; four children were born to this union. Dad and Mom farmed their entire life. Dad’s greatest love, however, was tinkering in the tool shed. He spent a great deal of time repairing broken farm machinery for himself & others and was always inventing. He could weld or machine a part out of old scrap iron and get by.

Like his fellow neighbors on the farm, he toiled long and hard to support his family. Initially, most work was done by hand until vehicles, tractors, and modern machinery and conveniences arrived. None of us ever remember his complaining about hard times or physical pain; that was his up-bringing and his generation. His life was good.

He is survived by his children, Bill (Cynthia) of Lyman, Iowa; Linda (Ken) Tjepkes of Dike, Iowa; Donna (Gene) Rilling of Center Point, Iowa; and Dorothy (Max) Goodvin of Council Bluffs, Iowa; 11 grandchildren, many great-grandchildren; sister, Virginia Holste; and many relatives and friends.

To order memorial trees or send flowers to the family in memory of Chester Swain , please visit our flower store.