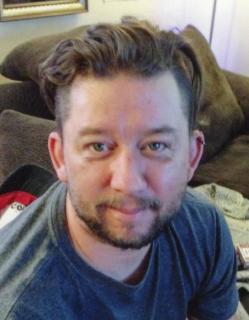 Funeral Services: Will be held on Monday, June 24, 2019, at 7:00 p.m. at the St. John’s Catholic Church in Greenfield with burial in the Iowa Veterans Cemetery in Adel, Iowa, at a later date with full military graveside rites by the Greenfield American Legion Head-Endres Post No. 265 and V.F.W. Post No. 5357. Father James Ahenkora will officiate the service.

Family Visitation: The family will greet friends on Monday, June 24th, from 5:00 p.m. to 7:00 p.m. at the St. John’s Catholic Church in Greenfield.

Memorials: Memorials may be directed to the Christopher Tucker memorial fund to be established by the family.

Growing up, Chris was very active in 4H and fundraising activities. After high school graduation from Bridgewater-Fontanelle High School in 1990 he joined the United States Navy. While in the Navy, Chris was an Airman E3 with Squadron VP-17 and flew in a P3 Orion plane where they tracked submarines by using sonar. Chris was an Aviation Anti-Submarine Warfare Operator. Chris served in the Navy during Desert Strom War Time. Being in the Navy allowed Chris to travel the world. He was stationed in: Orlando, FL, Pensacola, FL, Millington, TN, San Diego, CA, Mountain View, CA, Diego Garcia, British Indian Ocean Territory, Masirah, Oman, Barbers Point, HI, Misawa, Japan. During his travels he was able to make a complete trip around the world. After the Navy, Chris moved to Des Moines where he resided before moving to Omaha where he worked as a DJ for several years at The Max and then as a warehouse worker for RNDC. After being diagnosed with Adrenal Cancer and not well enough to live on his own, he moved back to his childhood home. Chris was a very avid fan of Star Wars and Star Trek. He loved to cook and do woodworking.

He was preceded in death by his father, Leo Tucker; sister-in-law, Becky Tucker; aunt, JoAnn Hogan; and cousin, Brian Morrison.

To order memorial trees or send flowers to the family in memory of Christopher Tucker , please visit our flower store.
Send a Sympathy Card