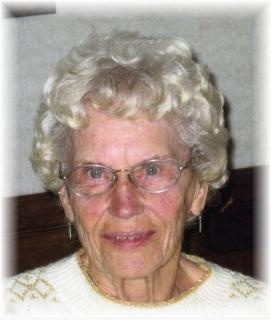 Funeral Services: Will be held on Saturday, May 4, 2013, at 10:30 a.m. at the Trinity Christian Church in Bridgewater with burial in the Victoria Township Cemetery, south of Massena. Pastor David Clark will officiate the service. A luncheon will follow the burial at the church.

Open Visitation: Will be held on Friday at the Steen Funeral Home in Massena from 12 p.m. to 7 p.m.

Clidie Marie Bagshaw was born December 25, 1919, in Composition, Missouri, the daughter of James Francis and Nola Ethel (Weber) Carmack. She passed away on Tuesday, April 30, 2013, at her daughter’s home, rural Massena, Iowa.

Clidie came to Iowa in 1929 and lived in Carson and came to Massena in 1939. She graduated from Macedonia High School in 1937. On February 4, 1942, she was united in marriage to Robert L. Bagshaw. She lived in her farm home for 70 years. She loved to read, quilt, sew and garden. She was a long time member of the Trinity Christian Church in Bridgewater and the Ladies Aide.

She was preceded in death by her parents; husband, Robert in 1974; infant daughter, Sharon; and two sisters, Clois (Ivan) Houser and Cathryn McMullen.

She is survived by her four children, Robert Bagshaw, Caren Greenwalt and husband John, John Bagshaw and wife Karen and Dennis Bagshaw all of Massena; nine grandchildren; fourteen great grandchildren; other relatives and friends.

To order memorial trees or send flowers to the family in memory of Clidie Bagshaw , please visit our flower store.